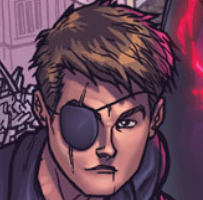 While the parents are away the kids will team up and try and overthrow a teenaged god. That’s how the saying goes right?

Previously in Danger Club: Well that would be nothing seeing that this is the first issue, but here is what inside the cover tells us: ”Three months ago. The universe was in deadly peril. The earth’s greatest heroes were summoned into space to battle reality’s ultimate evil. Our mentors. Our guardians. Our parents. Our teachers. They left. And they didn’t come back.” So essentially it’s your childhood dream of every adult leaving mixed with your other childhood, and probably current, dream of having super powers. In the words of Cosmo Kramer, ”Giddy up!”

One of the best parts of this issue was right at the beginning before the story even starts. It is a separate cover that comes from an age of comics that essentially revealed enough of the story so you know what would be happening, but not quite all of it. Thinking I had a fairly good grasp for what was about to unfold I pressed on, but was quickly disappointed.

What followed was not at all three friends and their slightly egotistical god-friend taking on a moon monster, nor a bonus story about two other super friends exploring a creepy mansion. What did happen was a quick blurb referencing the two kids searching this mansion and the unexplained fate falling upon them, and the three friends attempting to overthrow the son of Zeus in his make-shift coliseum. But they didn’t just attempt to overthrow Apollo as he was building up his following, they actually succeeded. Let me iterate this, along with a pair of moon-rock-”brass” knuckles, a seemingly powerless teenage boy beat a god into pulp and then killed him with a laser, in under ten pages.

The quick nature that all this took place in made it feel extremely unlikely. Maybe after three or four issues of story building and explanation of the kids’ powers maybe then they could kill a god. But the first issue in under ten pages? I’m just not buying it.

Eric Jones’s art is what kept me engaged in the issue. The facts of what was actually going on kept on trying to pull me out of the issue, but then I would look at the panels and I was sucked back in. Thankfully Jones can draw a chaotic battle scene while keeping everything clearly defined otherwise this would have been a real mess. His ability to draw characters like they just had their ass handed to them helped the story along too.

I had no real expectations going into Danger Club, but after seeing the faux cover on the inside I thought I was in for a real treat. After all was said and done though the story left me high and dry. The saving grace in the issue was definitely Eric Jones’s art and is a big factor in my decision to pick up next month’s issue. I think there is potential for this series for good story telling, but as for this I’m going to have to give it 2.5 out of 5 stars.