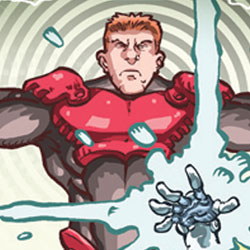 This June, Studio-407 is proud to bring an all-ages graphic novel of super-heroic proportions with THE SPARK. Sensational new talent Martin Renard and Nahuel Sagarnaga Cozman create a refreshing, modern take on conventional superheroes in an epic saga of three powerful individuals destined to be Earth’s protectors, and Lucas, a reluctant fourth struggling to come to terms with his future!

“THE SPARK is the best example of what all-ages comics should be!” says Studio-407 Managing Director Alex Leung, “Young readers will be able to relate to Lucas’s internal conflict and the steep learning curve of growing up, while science-fiction and superhero veterans can appreciate the unique touches that Martin and Nahuel have brought to the table.”

If you had the chance to be a superhero what would you do? Fifteen years ago, a phenomenon called “The Spark” created four superhumans who sacrificed themselves to stop an world-wide cataclysm. Now, The Spark has happened again, creating a new generation of heroes. As three heroes emerge to accept their responsibility as protectors of humanity, everyone wonders, where’s the fourth? Meet Lucas, who would save the world, but he has other problems – school, his supermarket job to help his mom with the bills and a little sister who’s more than a handful. But when an alien horde arrives to enslave the planet, will Lucas rise up to be the hero mankind needs? Blending sci-fi and super-hero adventure, THE SPARK is an unforgettable story for all ages about the most unlikely hero!

“What makes THE SPARK so compelling is that everyone feels like Lucas sometimes,” says Studio-407 PR & Marketing Manager Ivan Salazar, “We all have to deal with bills and family issues, but not everyone has to do that while battling an alien invasion! It’s the tale of a super-human everyman that will make you think what would you do if the world rested on your shoulders?”

THE SPARK is written by Martin Renard with sensational art by Nahuel Sagarnaga Cozman. This title will be released in softcover from Studio-407 in June with a price point of $12.99 and a Diamond code of APR121224.

About Studio 407
Since 2006 Studio 407 (www.studio-407.com) has been a dynamic, creator driven publishing house producing some of the most imaginative and unique properties in the comics space today. By tapping into both Eastern and Western influences, stories created by Studio 407 exist with the ability to appeal to audiences across several platforms of popular media including video games, animation and feature films. With nearly six years of experience developing intellectual properties, Studio 407 believes that the greatest stories can transcend any platform to reach the widest audience possible. From capes to kung fu. From our world to yours. Welcome to the 407 Age of Comcis!