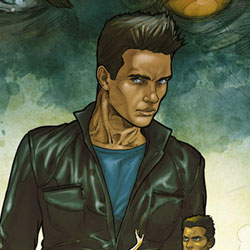 Dorian Gray #1
Writers: Darren G. Davis & Scott Davis
Pencils: Federico De Luca
Cover Artist(s): Federico De Luca
The Grays are a cursed family. Dorian Gray IV, the last of his line, struggles with the realization that his personal demons are exactly that…a supernatural force that plagues not only the Grays but many of society’s wealthiest families. Convinced his redemption is only secured through ridding the city of demons called the Morbi, Dorian launches an ongoing crusade for his soul.

THE MISADVENTURES OF ADAM WEST #8
Writers: Leon McKenzie and Edward Gross
Pencils: Luis Rivera
Cover Artist(s): COVER :  Chris Mason
Adam West has been jumping through time and dimensions, and this time his misadventures bring him to outer space where he and old chum are together again for the first time (in comics form!) as they team up for an intergalactic adventure that will set the stage for the Boy Wonder’s all new solo adventures.

Soldier’s Of Fortune Magazine Presents: Stealth #2
Writers: Marc Shapiro
Pencils: Steven Black
Cover Artist(s): 1 COVER :  Steven Black
STEALTH literally takes to the sky as they attempt to find the missing nuke before the world goes up in a nuclear fireball. GAMBIT pulls out all the destructive stops for world domination. A mammoth battle plays out somewhere near the top of the world. It’s war action the way you like it in Issue 2 of Soldiers Of Fortune entitled ‘Assault On Eagle’s Nest’.STEALTH’S credo: No rules are the rules.

The Secret Lives of Julie Newmar #3
Writers: Marc Shapiro
Pencils: Emiliano
Cover Artist(s): Mike Morman
Julie’s hunt for Vertigo is sidetracked by an unexpected hitchiker in time, a stop over in San Francisco 1967 and the big reveal…Interplanetary love and sex. Now that I’ve got your attention…There’s all this and more in Issue 3 of The Secret Lives Of Julie Newmar, the latest in the collaboration between 60’s icon Julie Newmar and the unbridled imagination of New York Times bestselling author Marc Shapiro. Oh and one more thing…Time Is Tight.

Boy Wonder #1
Writers: Darren Garnick
Pencils: Ramon Salas
Cover Artist(s): Ramon Salas
The Boy Wonder is  about to plunge back into the hero business. After chasing his dogs through a time-travel portal, He finds himself on Pluto where he must thwart evil plans to switch the planet’s orbit with the Earth’s!.  Another spin-off from the popular series “The Mis-Adventures of Adam West”.

It Came From Beneath the Sea…Again #2
Writer: Clay and Susan Griffith
Pencils: Chris Noeth and Todd Tennant
Cover Artist(s):  1 covers : Chris Noeth
Now, another monster is rising in the warm blue waters surrounding Taru Taru, a speck of land far out in the Pacific. And this time it’s worse than anyone ever imagined.

Juliet #2
Writers: Zach Hunchar
Pencils: Ethan Wright
Cover Artist(s): Ethan Wright
The modern world has revealed itself to be a much more dangerous place for Juliet than Verona ever was. After successfully defeating an armored villain, Juliet begins realizing that her enemies aren’t always monsters. As the threats continue to assail her,  she experiences the consequences of technology and her human problems grow worse than the costumed kind.

Vincent Price: HOUSE OF HORRORS #3
Writers:  Stefano Cardoselli
Pencils:  Stefano Cardoselli
Cover Artist(s):  Stefano Cardoselli
An all-new 4 issue mini series from the Master of Horror.  A small, weird western town on the edge of hell is invaded by a horde of demons in the shape of bandits.  On their wild rampage through the town, the bandits run afoul of an  Asperger’s syndrome boy with strange powers, and his silent giant companion.  The boy and the giant defeat the demon-bandits and drive them back into Hell.  The boy climbs up on the shoulders of his giant friend and rides off into the sunset, leaving the town’s preacher and mayor, who looks suspiciously like VINCENT PRICE, wondering…