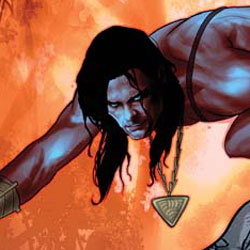 Dynamite Entertainment sent Major Spoilers a sneak peek of titles arriving in stores this week.  Take the jump for an early look at The Bionic Woman #1, Vampirella vs. Dracula #3, Lord of the Jungle #3, The Bionic Man #8, and more.

THE BIONIC WOMAN #1
32 pages FC • $3.99 • Teen +
Written by PAUL TOBIN
Art by LENO CARVALHO
Cover by PAUL RENAUD
“Black & White” Retailer Incentive cover by PAUL RENAUD
“Virgin Art” Retailer Incentive cover by PAUL RENAUD
Paris is the city of love? Not anymore… not since Jaime Sommers, the Bionic Woman, came to town hot on the trail of the Mission, a collection of insanely high-priced surgeons who’ve been murdering OSI’s bionic prototypes in order to provide new life for billionaire patients. But while the Bionic Woman is hunting the Mission, their #1 hunter is after her! Can Jaime pick up the pieces of her past while protecting her life in the present, or will the city of love turn its back, and its bullets, on the Bionic Woman? Acclaimed writer Paul Tobin brings you a tale of baguettes, bullets, and bionic badass!

VAMPIRELLA VS. DRACULA #3
32 pages FC • $3.99 • Teen +
Written by JOE HARRIS
Art by IVAN RODRIGUEZ
Cover by JOSEPH MICHAEL LINSNER
With Vampirella trapped in Dracula’s shifting past, Jack Halloran, is left to deal with the machinations of his modern-day incarnation, the mysterious and deadly Dragunsun. But when changes to the eternal narrative first chronicled by Bram Stoker ripple through the present, each of the characters affected, in all the timelines they cross, must adjust, adapt and reorient themselves if they wish to see the story through until the end, much less survive the effects. And when the strange and mystical “Order of the Dragon” make their presence known, everyone learns this is all neither an accident, nor a game.

LORD OF THE JUNGLE #3
32 pages FC • $3.99 • Mature
Written by ARVID NELSON
Art by ROBERTO CASTRO
Covers by PAUL RENAUD (50%), LUCIO PARRILLO (50%),
FRANCESCO FRANCAVILLA (1-in-10)
“Virgin Art” Retailer incentive cover by LUCIO PARRILLO
“Jungle Green” Retailer incentive cover by PAUL RENAUD
“Virgin Art” Retailer incentive cover by FRANCESCO FRANCAVILLA
Panthers, crocodiles, snakes, pirates… Jane Porter and her fellow castaways have been through a lot since they were stranded in the African jungle. But now they face an even greater threat – the vicious troop of apes who killed Lord Greystoke over twenty years ago. All the while, “White Skin”, a mysterious wild man, lurks just out of sight. Whether he is a friend or an enemy remains to be seen. And what is his connection to the seaside cabin Jane and her companions have come to call home? Find out in Lord of the Jungle #3: The Call of the Primitive!

Pantha is many things, but never an easy target. Yet the madmen who relentlessly pursue her think otherwise. To them she is prey, just another beautiful trophy to claim as their own. But beauty is only skin deep. Beneath the surface there’s a hunger they can not hope to escape, for as they soon discover, this cat’s bite is far from gentle…

It’s the very best of Pantha, all in one place!