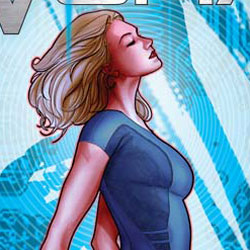 Dynamite Entertainment has done quite well with the Bionic Man, which means it is time for the spin-off series to appear, and this week, we get our first look at the Bionic Woman.

Previously in The Bionic Woman: Being the first issue, one might think there wouldn’t be anything to fill in here, but you might remember another series Dynamite Entertainment is publishing called The Bionic Man. The first issue featured Jaime Sommers and her love affair with Steve Austin that came crashing to a halt when Austin’s jet crashed, and the world thought he was lost forever…

This first issue starts like many of the books from Dynamite, in that we are presented a story that could very much work as a stand alone issue. Across the rooftops of Paris, two figures are fleeing from a well armed police force. The woman knows how to fight, and the man knows just to keep himself from being killed. As the duo race, they share what information they know about the Bionic Woman. And it plays out just like you expect it would – when Steve Austin returned from “the dead”, Sommers and Austin got busy making up for lost time, but a “freak” parachute accident landed the teacher in the same operating room that lead her boyfriend to becoming a cyborg capable of extreme covert operations.

Except Jaime went rogue, and on top of that someone is hunting down and killing anyone and anything that has a cybernetic implant. No clues are left and the reader is lead through the issue by the two “agents” who are trying to piece all of the facts together. And then, as you might expect it, the female character is revealed to be Jaime Sommers…

Personally, I didn’t like this reveal as Tobin dropped many hints leading up to that moment that I had it all figured out way ahead of time. It’s not that I don’t mind foreshadowing if it is done on the sly, but this one was pretty blatant. If there is a plus side to this reveal, it’s that we get a good understanding of what makes Sommers tick (and quite possibly tock), and sets up a sympathetic character for the reader. And that is definitely what this series needs – a character the reader can get behind, who isn’t a mindless automaton, and ends up doing what is right for moral reasons, and not because a shadow government is pulling her strings.

The art in this issue was a bit scattered in my opinion. There were times when body proportions and facial features were out of whack, but in a series about someone who can change her look on a whim, I can almost let this slide. Then there is the heavy ink house style that pops up more often than I’d like. I don’t despise the art, but there seem to be too many lines in some panels, and not enough in others.

The coloring is a bit off as well, with some odd choices in overall shading that make Jaime look like a wax statue, or a prostitute. But what do I know about makeup? I do know what I like, but this issue had a few more misses than hits.

I do like titles that feature a strong female lead, and the Bionic Woman does have a very strong central character. Though the art isn’t to my liking, the overall issue is solid enough that those looking for a heroine that doesn’t have a boob window, but can still kick ass, will find a home with The Bionic Woman #1. Overall, it’s worth a glance, and I will come back for the next two issues, if for nothing else than to see how Sommers escapes the deadly cliffhanger ending. I’m giving The Bionic Woman #1 3 out of 5 Stars.