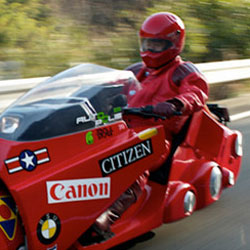 MOVIES: Akira bike is real… but not for you

Remember Kaneda’s bike from Akira?  Remember how you wished a bike like that was real, and that you could see it with your very own eyes?  Today is your lucky day, Dear Reader, and it is all for a good cause. This replica bike from the animated movie, and manga series, Akira was built by Masashi Teshima, and has the official blessing of Katsuhiro Otomo, the creator of the series.  It took seven years to build this bike at a cost of $120,000, so it will probably be the only one ever built by Teshima, which means the chances of you getting your hands on this bike are pretty slim. Now for the good news, Teshima is riding this bike across Japan to raise money for children’s autism, and then after the ride, the bike will go on display to help raise money for last year’s earthquake/tsunami.