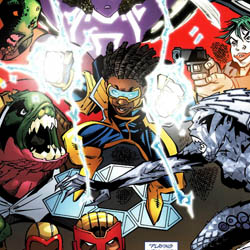 Or – “Where Will Static Turn Up Next?”

Though many people predicted that some of the New 52 would not make it past 9 issues, I was extremely surprised to find that Static Shock was one of the first books to go down swingin’.  As stories about the creative difficulties on this book come to light, I find myself unsurprised (but still saddened) by Virgil’s latest cancellation.  Will this last issue tie up everything for Dakota’s finest hero?

Previously, in Static Shock:  Virgil Ovid Hawkins received his powers from a jolt of something called Quantum Juice, giving him command of the electromagnetic spectrum.  Using his scientific knowledge, his desire for justice and snappy fashion sense, Virgil became Static, defender of justice and goodness nationwide.  Recently, he relocated to New York and set himself up with a new status quo and a new gig, while dealing with new personal challenges and new villains (including one who seems to have been the Joker.)

THEY SHOULDA BROUGHT IN SOUL POWER…

The weirdest part of this final issue?  It’s actually a pretty respectable first issue in execution.  We open with Static going head-to-head with a super-villain, showing off his electrical powers and such.  Of course, things aren’t quite what they seem, as the “villain” turns out to be a disenfranchised, bullied young woman who has captured her tormentors, allowing Static to show off his empathy and a clear sense of justice.  It’s all very well handled, especially when Static convinces the bullies to admit what they’ve done with a taste of their own medicine.  These kind of “might makes right” moments are difficult, but writer Marc Bernardin balances things out by having our young hero actually realize and address the issue.  It doesn’t quite make up for him bullying the bullies, but the effort was appreciated.  Static then rushes off to school, as he’s late for an appointment with the school psychologist…

I HATE THE “OFFICIOUS MEDDLER” CHARACTER…

The second half of the issue is a crash-course in Virgil Hawkins, giving us the backstory on his childhood as “the smart kid” in Dakota, the pressures that led him to participate in gang warfare, and his origins in “The Big Bang.”  There’s a lot of good character work packed into this conversation, as Virgil explains his superhero life in terms of the usual high-school drama.  It’s very well done, with dialogue and art balancing back and forth, underlining Static’s cleverness as he talks about his “afterschool job.”  Things get ugly, though, as the psychologist reveals her ulterior motive: figuring out whether he’s a gang member or a victim of child abuse.  There’s a tense moment wherein Virg realizes that his bruises from the Static part of his job actually DO support her theory, and the whole thing is left unresolved at the end, with the class bell ringing and Virgil escaping into the streets.  The ending feels very tacked-on, as though things had been plotted out before the cancellation notice came through, and the big question raised by the issue may end up never being answered.

THE VERDICT:  I WISH THIS ISSUE WAS EARLIER IN THE RUN…

This issue does a lot of things that the previous 7 didn’t, notably telling the readers clearly who the hero is and what he’s up to, rather than relying on readers’ long memories.  Scott McDaniel’s art is very strong in this issue (in every issue, actually) and there’s a lot here that emphasizes what’s best and most unique about our main character.  It’s pretty clear that there were differing ideas on what to do to relaunch Static for the New DCU, and I have to say I’m very disappointed that those creative differences tanked Static’s success.  Had this issue, or one like it, come earlier in the run, I believe we would not be watching the DC Powers That Be shuffle Virgil off to the side to feature another property.  Static Shock #8 is good, but it’s a tragic case of too little, too late, earning 3 out of 5 stars overall.  With luck, though, Static will end up finding his place somewhere else in the DCU, maybe Stormwatch?  (With OMAC joining the JLI, it’s not unprecedented, and wouldn’t Virgil’s attitude be a stitch in that high-falutin’ company?)