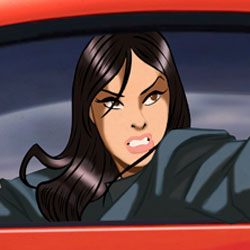 I fell in love with Des Taylor’s work on Vesha Valentine, and now the artist is back, providing pin-up art for the upcoming Epic Kill mini-series by Raffaele Ienco and released through Image Comics this May. Hitmen and mercenaries from around the globe are ordered by the President to bring down an eighteen-year-old super assassin named Song – but she’s going to turn the tables on them – and every kill is going to be epic!

Song has trained for years into adulthood to take revenge on the man responsible for her parents’ deaths – the man who has just been elected President!