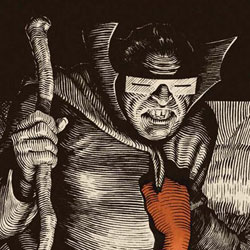 Deep inside the earth, our hero is poised to do battle with the Mole Man. But does anyone win in a battle over the dead?

Previously in Daredevil: Matt Murdock almost blew his cover while showing up to a graveyard crime scene, but The Man Without Fear was able to safely avoid detection and dive down a hole to find these underground casket thieves. After following a caravan of casket-totting Moloids, Daredevil found their final destination to be at the feet of The Mole Man. Fueled by the rage of his own father’s casket being stolen, DD flung himself at Subterranean King and after a slight skirmish was falling deep into what he thought to be another pit.

Once his fine tuned senses kick in, Daredevil begins his evasive maneuvers of the giant beasts maw, which came down to him tearing about its tongue. Freshly coated in the monster’s blood, DD sets off to find where Mole Man has gone with his prized, casket treasure.

Murdock follows the resounding sound of his voice and interrupts what was a beautifully honest, albeit slightly disturbing, moment as Harvey confesses his love to his departed co-worker. During his talk we learn the reason for his escape from the top world into the depths of the Earth. Once Matt can hear no more, he engages with Harvey in an attempt to understand his end goal for stealing so many caskets.

What followed was a brilliant couple of pages of action, but what made it so good was the dialogue happening concurrently. Harvey was testing Matt not simply physically, but emotionally as well by making him come to terms with the death of his father. Love and the pain from losing it were explored multiple ways in this issue and even though it didn’t end in the happiest of ways it was still a satisfying ending.

So there is this guy that goes by the name of Paolo Rivera, have you heard of him? Hopefully you have because he is the main artist for this title and his work makes drool come out of my mouth. I mean did you even look at this issue’s cover? I’m going to buy the print copy of this just so I can frame and hang it on my wall, unless anyone out there wants to buy the original cover art and give it to me, which I would gladly accept. But Rivera isn’t simply an artist; he is also a storyteller. His use of page layouts keeps action sequences moving fast, mix that with his time elongating use of gutters, and he creates a story you get sucked in to.

From cover to cover this book is dedicated to giving the reader a deeper understanding of the inner turmoil Matt Murdock, and even The Mole Man, face. Even during the fight scene the fighting was secondary to the dialogue flying between the two opponents. Ultimately what it boils down to is that Mark Waid is pulling me into this book not through giant action sequences or head spinning plot, but by making my genuinely care about the man underneath the mask. Every issue you read of Daredevil makes you want to keep reading more and Daredevil #10 is no exception, and is why I’m giving it 5 out of 5 stars.