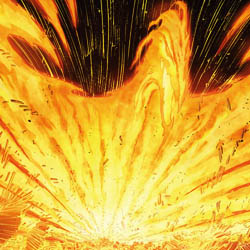 Or – “Measuring ‘The Biggest Comics Event Of The Year’ Takes A Big Stick.”

Is it just me, or does the cover to this issue look to anyone else like Conky’s Secret Word was “crossover?”

Previously, in Avengers Vs. X-Men:  There has long been tension between Earth’s Mightiest Heroes and the Children of The Future.  Professor X had close ties with Mr. Fantastic, Iron Man and other central figures of the Marvel Universe, but Cyclops has been a more contentious leader, keeping out of the major superhero battles of the last few years, moving his people (i.e. the vast majority of surviving mutants in the world) to an island where he has declared sovereignity, and taking the likes of Magneto and Doctor Nemesis into his confidence.  Captain America has been busy with other stuff (being dead, mostly) and hasn’t had time to build many ties with the mutants while rebuilding the damage done to the superheroes credibility and infrastructure since, basically, Secret War.  The mood, however, is about to change…

We open in deep space, as a young alien looks out the window at a blinding flash, just in time for his entire planet to be annihilated by a massive gout of flame.  A fiery presence in the form of a bird.  The Phoenix Force eats his planet, and flies away into the void, headed for it’s new target, a shining planet known as… Earth.  On that far away world, we get some lovely Romita scenes of heroes bickering, some nice shots of Thor (is he back already?) saving a crashing airliner, and some REALLY bizarre looking Ms. Marvel panels.  JR Jr.’s evolving art-style is one that I find attractive, but the angularness of it makes for some really odd-looking adult women.  It’s also interesting to see the way things in comics have changed in the last ten years, as the crashing airliner knocks the top off the Chrysler building, complete with the image of hundreds of people plunging into the streets below.  Spider-Man, Iron Man and company save all the innocents they can (though I don’t believe physics works the way this issue shows them working) and the source of the disturbance is revealed to be… NOVA!  I don’t think it’s Richie Rider back from the dead, though, as this Centurion has different coloring and doesn’t seem to recognize Captain America.  “It’s coming,” he croaks, before falling unconscious due to the stress of re-entry.

THE ‘ZARK’ HEARD AROUND THE WORLD.

I have to say that the pacing of this issue is well-handled, as that stunning cliffhanger (even if you’ve read all the promotional materials, as I have) cuts straight to a one-on-one sequence of Cyclops training Hope Summers on his island stronghold.  Hope fares much better than Ms. Marvel under the pen of Romita, which makes me wonder if the issues with rendering adult females is as simple as “curved lines.”  Hope once again summons the mantle of the Phoenix (this time out of anger), while the Avengers meet with the Joint Chiefs of Staff and the President regarding the dangerous alien presence headed for Earth.  This issue suffers badly from “Trailer-itis”, as large wodges of it feel very familiar, as they’ve been teased and previewed and sneak-peeked all around the comics industry, but none is so defanged as the tension-filled meeting of Captain America and Cyclops.  Both men are giants of the Marvel Universe, both men are strong and opinionated leaders, and both have ideas about the other.  In a nice bit of subtlety, Captain America starts out calling his mutant counterpart “Cyclops,” but quickly moves to the accusatory “Summers” as their argument gets heated, and Bendis does good things with the sequence around their confrontation.  Both men have assumptions about the other that aren’t quite true, but only we, the readers, are privy to all the information.  When the gauntlet finally is thrown, it is thrown hard, and the issue ends with a tense superhero stand-off.

THE VERDICT:  A SERVICEABLE, YET SHOP-WORN PREMISE…

For what the issue is (a build-up to a big fight), it is handled very adeptly.  Romita’s art is more subdued that his recent Avengers work, and the inks by Scott Hanna help to smooth and round off the sharper edges of Jr’s avant-garde style.  The characterization is stronger than many Bendis works, with only a couple of bits of Cyclops dialogue bearing the dents of the almighty plot-hammer, and Captain America’s pause-filled and awkward conversation with an uncertain Wolverine are Bendis doing what Bendis does best.  Honestly, I believe that the majority of reader’s problems with this issue are going to come not from the story that it tells, but the external concerns of that story.  Have we seen this before?  Yes.  Is it very similar in premise to Civil War?  It is, albeit a Civil War mixed with elements of Annihilation.  Would all the heroes of the Marvel Universe naturally fall in line behind their respective blue-clad leader?  Possibly not, and I suspect that Warpath, Red Hulk, The Beast, Iron Fist and others should be much more contentious about going to war, even over as big an issue as Phoenix.  So, how do we measure those external conceits, and how do they affect the enjoyment of the book?  The issue has some nice character beats, a solid use of classic characters, some good art (at least by my assessment).  The story it’s telling is pretty standard, though, and most of the characters in the book are barely heard from, while the ridiculous “save the poor people streaming from the bottom of the severed top of the Chrysler Buiilding” scene is hard to swallow, and things get ugly a lot quicker than my knowledge of Cyclops and Cap thinks that they should.  Avengers Vs. X-Men #1 gets it’s point across, starts the crossover off and explains the things that need explaining, and if I take away my worries and reservations about what it’s exemplifying, it is crafted well enough to earn 3.5 out of 5 stars overall.  There is more here than “And then they fight!”, but how much more is still unclear…