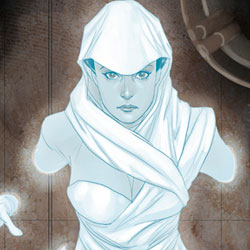 A thrilling announcement coming from Emerald City Comicon: the Dark Horse title Ghost will be returning to single-issue monthly format!

Ghost debuted in 1993 as part of Dark Horse’s Comics’ Greatest World series. The fan-favorite title ran for ten years and featured crossovers with Hellboy, X, The Mask, and Barb Wire.

Comic Book Resources recently broke the exclusive that Ghost would be returning this summer in Dark Horse Presents #13. This new incarnation of Ghost is written by Kelly Sue DeConnick and illustrated by Phil Noto. Fans can pick up the critically acclaimed series in September, beginning with a zero issue that collects the Ghost stories from Dark Horse Presents.

“There’s something about her, something about the way Phil draws her . . . I think it’s in the eyes. It’s like he’s given her a soul. She’s equal parts charismatic and creepy for me to work with, honestly,” said DeConnick. “The new series is a fresh start, an alternative take. No prior knowledge of the character or the universe is necessary. There’s a good chance you’ll be into this one too.”