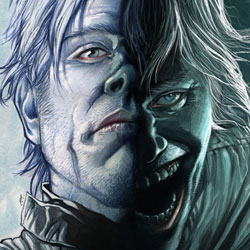 From Emerald City Comicon: Paul Tobin announced he’s writing a blend of horror and crime that will appeal to those who like books such as Locke & Key, Preacher, or B.P.R.D.! Colder comes from the creative team behind the successful Falling Skies comic, writer Paul Tobin (Marvel Adventures: Fantastic Four, Marvel Adventures: Spider-Man) and artist Juan Ferreyra (Rex Mundi).

“Horror and mystery are two things that have always fascinated me, and I wanted to bring those elements together in a story woven around what I consider one of my strongest tools as a writer, which is character. One facet of horror that I really wanted to explore is how the tension of horror is at its peak when it’s still a mystery. But . . . what if we had a chance to peek behind the curtain and into the darkened closet, and found that the truth is even worse?” Paul Tobin questioned.

Declan Thomas’s body temperature is dropping. He checks it every day, and it’s dropped from 98.6 to a current average in the high fifties. He never gets sick, never feels pain. He’s just an ex-inmate of an insane asylum that began operation in the 1890s, specializing in those poor souls deemed too dangerous for society. As to when Declan himself was admitted, the records were destroyed in a fire. His nurse has found references to him that go as far back as the 1940s . . . which is odd, since he doesn’t look a day over thirty.

“Artist Juan Ferreyra and I really felt comfortable working with each other on our Falling Skies collaborations, so of course we wanted to team up again, but this time we wanted to delve into the uncomfortable . . . to jerk the chains of a story’s comfort level and take some real chances. Because, bottom line, the type of material I myself like to read is material like Hellboy, or Preacher, or anything where the creators are both taking chances and having fun. Juan and I are taking chances, here, and we think it should be fun for everyone,” said Tobin.