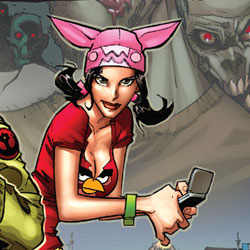 What happens when nerd on nerd hate turns into fanboys united in order to survive the zombie apocalypse? BOOM! Studios attempts to answer the question when zombies attack the San Diego Comic Con in Fanboys vs. Zombies #1.

Previously in Fanboys vs. Zombies: Now that’s a real problem isn’t it? Being the first issue, there isn’t much to write about in this area, so what are you still reading this section for? Go to the next header, already…

The modern day zombie mythos was made famous by George Romero in 1968’s Night of the Living Dead, which itself was inspired by Richard Matheson’s I Am Legend (1954), and not the I Am Legend atrocity staring Will Smith. In short, the modern zombie is someone who comes back to life and wanders around seeking human flesh to consume.

As the most packed and popular comic book conventions in the United States, the San Diego Comic Con attracts all types. For some, SDCC is an event of a lifetime. For others it is that moment when everything clicks and that person decides to start their own comic book website. And then there are some who have so much fun, that they vow to be best friends forever, and each year return to the show in hopes of reliving their glory days.

That is the case with our band of merry heroes introduced in this issue. Unfortunately, something terrible has happened between then and now, and the friendship has been shattered, and sides taken, all over a girl.

When those former friends find themselves in the same convention panel, it looks like all hell is about to break out… until all hell breaks out. But instead of fisticuffs between friends, zombies appear on the scene (possibly created from a bad convention hot dog) and begin eating their way through the crowd (not unlike a convention hot dog that eats through your gut). The former friends bans together to flee, but they quickly realize they are in bigger trouble than originally thought.

I’ll give it to Sam Humphries for giving each of the seven characters enough of a voice to set them apart, and for not devolving into typical stereotypes. The dialogue is believable enough, and Humphries keeps the characters from rambling needlessly, which keeps the action moving. And the action does move very quickly through these 22 pages.

I really got a kick out of this first issue. It touches on all the right tropes, and throws the zombie twist to make the friends who have strayed fight for their lives, and hopefully learn a little something before its done.

It’s just too bad we’ve seen it before. I know that iterations and derivatives are what drive the comic book industry, but ever since I first heard about this series, I kept thinking that I’d seen it somewhere – and that somewhere was on the Intardwebz in the form of Night of the Living Trekkies. The book tells of a zombie outbreak at a Star Trek convention, and the fans who try and make it out alive. There was even a trailer made by the same people who made Pride and Prejudice and Zombies, and Abe Lincoln: Vampire Hunter, and that trailer is what was burned into the back of my brain for the last two years.

But is that really a problem?

I’m going to let you be the judge, but I’m giving Fanboys vs. Zombies a pass. Some will cluck their tongues in shame, but I’m going to sit back and laugh – the more tweaks to the genre the better, and the more one can drive the humor home to a specific group, the better.

If there’s something familiar about the art in this issue, it’s not a mistake. The characters that populate the world of Fanboys vs. Zombies were designed by Humberto Ramos. I’m pretty sure everyone knows of my love for Humberto Ramos art by now, but if you are new to the site (welcome), I’ll sum it up for you – I really love Humberto Ramos art.

What Jerry Gaylord does in this issue, is take the best of what I like about Ramos’ style, and brings his own talent to the drawing table to give us something that is familiar, yet different at the same time. I really could stare at some of these pages and covers for hours and not get bored. This is especially true when the zombies start attacking. There’s plenty of guts and gore, but it’s drawn in a way that doesn’t make me wince in pain and fear, the way Ryan Ottley’s fantastic zombie art often does.

Yes, it is a horror flick gone horribly funny. Yes, it will more than likely hit on every zombie trope we’ve seen since 1968. Yes, there are going to be those that say this is the low point of Western Civilization, but dammit, for a dollar, this issue is so worth the price of admission, and I enjoyed reading it. Humphries’ writing sets up the first issue apocalypse, while Gaylord brings some fantastic art. If you are a fan of the zombie genre, this title is worth picking up this week. I’m giving Fanboys vs. Zombies #1 4.5 out of 5 Stars.