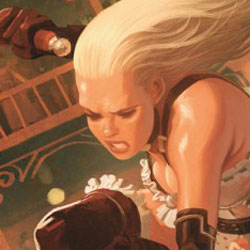 Finally out of Gotham, Jonah Hex and Dr. Arkham have migrated south, and as the title of the book indicates, there are a couple more all-stars that join the line-up this month.

Previously in All-Star Western: Having broken up a child labor ring in Gotham City, Jonah Hex has moved south to New Orleans to track down the escaped ring leader.

There’s nothing like post Civil War racism to put a bad taste in your mouth, and no sooner do Dr. Arkham and Hex arrive in New Orleans do they get a taste of what the local klan is up to in order to keep immigrants and slaves at bay – blowing up buildings with women and children inside. Fortunately, two other heroes from DC’s vault are already working the case; Nighthawk and Cinnamon.

Some may remember Cinnamon from the Villains United run of Infinite Crisis, or her appearance in Checkmate as one of the organization’s Rooks. Her history in the DC Universe dates back to Weird Western Tales #48 (1978), where we learned of the orphaned daughter of a slain sheriff, who grew up to hunt down those that killed her pa. While we don’t get a full New 52 history of the heroine, the last two incarnations of Cinnamon have been generally the same, so I don’t expect to see much change here.

The backup feature in this issue (hence the $3.99 cover price) does give a newly conjured history of Nighthawk, and we learn a bit more of his past before his first appearance in Western Comics #5 (1948). Palmiotti and Gray do a fine job of creating new character mythologies that are rooted in the source material – though I honestly hope they keep the whole reincarnated spirits of Khufu and Chay-Ara completely out of this retooling, because the Hawkman/Hawkgirl history is pretty much F’d to hell at this point.

Hex eventually agrees to help the duo infiltrate the August 7, and being a soldier from the South serves its purpose in getting his foot in the door… or in this case, the Arena. The crux of the issue revolves around an arena of death, where two people enter and only one emerges victorious. The champion is Z.C. Branke, who takes down opponents much larger than herself, and before Hex knows it, he’s face to face with the killer as the crowds cheer wildly.

This is a very well paced issue, and Palmiotti and Gray do a fantastic job of adding depth to each character we meet, even if they are only in the issue for a few panels.

Since the first issue, Moritat’s art has been phenomenal. The art screams European comic on each page, and that makes this look at the Old West that much more interesting. The detail found in each panel is exacting, and while others may simply skip over a key flourish of a character’s wardrobe, Moritat brings it front and center, and more than once, I found myself thinking, “Wow, look at that!”

Moritat brings all the gruesome that life hands to the DCU of 1861 in superb detail. Even though Hex is a horrible sight, others have similar afflictions, and few come out as a pristine beings in this issue. Complimenting Moritat’s style is Gabriel Bautista providing colors. Though the highlights and shading effects look really good, it’s the textured surfaces that appear throughout the issue that brings that extra bunch.

If you haven’t read All-Star Western because it took place in Gotham City, and your distain for anything even remotely related to Batman, turns your stomach, I think you’ll find this issue a nice change of pace. Different location, more western characters from DC’s vault, a story written by the dynamic duo of Palmiotti and Gray, with art by Moritat is a win/win/win/win all around. All-Star Western #7 is a great jumping on point, and earns 4.5 out of 5 Stars.