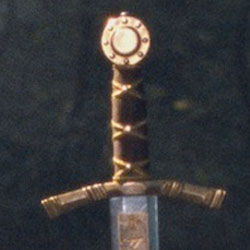 SNEAK PEEK: Merlin – The Sword in the Stone

Part two of the season finale of Merlin arrives this week, and we’ve got a sneak peek, after the jump.

With Camelot firmly in the grasp of Morgana and her reign of terror, Merlin must go to extraordinary measures to restore Arthur’s faith and prove to the young King that he was truly born to rule in the second half of the thrilling two-episode MERLIN season finale, “The Sword in the Stone, Part 2,” premiering Friday, March 30 at 10 p.m. ET/PT on Syfy.

Arthur has seen his kingdom overthrown by Morgana (Katie McGrath) and the powerful Southron warlord Helios (Terence Maynard) – and discovered his most trusted uncle Agravaine (Nathaniel Parker) has deceived him.  Now, Arthur has lost the ability to believe the people of Camelot would ever follow his lead.

But Merlin (Colin Morgan) guides Arthur (Bradley James) to one the most iconic symbols of the Arthurian legend to prove his worth: The sword in the stone. There, Excalibur awaits, and Arthur may be able to embrace his destiny.

The sword in the stone has been handled with MERLIN’s now-familiar mix of intrigue and ingenuity – interpreted, asso many elements of Arthurian lore have been, with a unique perspective. When Arthur and Merlin find Excalibur, they share a moment of awe – and the look on their faces, Morgan says, was genuine.

“We really felt the importance of the moment,” Morgan says, recalling being on location in Wales to film the scene. “It’s one of those images that we have read about for so long – we have them so ingrained in our heads – that there’s something really stirring to have it right there in front of you and to act it out.” [quicktime]http://www.majorspoilers.com/media/ms4e13a.mov[/quicktime] “I think our fans will find the scene an intriguing, interesting take on the legend,” he adds. “Bradley and I were both genuinely aware that it was a very iconic moment, and we realized it was such a very special thing to be part of – and that made it one of the most fun days of filming during the entire season.”

It’s an example of the intricate, iconic pieces of the Camelot legend that need to fit perfectly within the world that has been created for MERLIN, says co-creator and executive producer Johnny Capps.  In addition to Excalibur and the stone, those elements include the Arthur-Gwen-Lancelot love triangle, Morgana’s siege of Camelot, Merlin’s rekindling of Arthur’s complete trust, and Arthur’s realization of his true destiny. Capps says that plotting the path and scripting the details for incorporating those elements led to healthy debates between him and co-creator and executive producer Julian Murphy.

“Arguing is sort of an essential for creating, and it comes from a place of passion for the show,” Capps explains. “But I do think we have the most ridiculous arguments: We had a morning where we completely fell out because we were arguing over the qualities of pixie dust. “It’s not because we don’t like each other, it’s because we have strong, passionate feelings about the show. The thing about creating and making shows is that it’s incredibly personal. I think the more passionate you argue about something, the better it becomes – because you make sure that idea is watertight by arguing it and having large conversations. You make sure the concept or the story line or the characters will absolutely work. It is absolutely part of the creative process,” Capps says. Then he adds, with a laugh: “So we argue … and then Julian always admits that he’s wrong.” “The Sword in the Stone, Part 2,” the fourth season finale episode of MERLIN, airs Friday, March 30 at 10 p.m. ET/PT only on Syfy.  All three seasons of MERLIN are now available on DVD and on iTunes.  Be sure to follow the latest news on MERLIN at the Official Merlin page on Facebook.