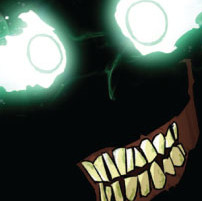 Disregarding the age-old advice of ”grab your funnel cake then leave” when going to an amusement park, Peter, Ray, Winston, and Egon find themselves trapped within the grounds and surrounded. Will they all make it out with their souls?

Previously in Ghostbusters: The paranormal experts have been granted permission to disregard their order to fulfill physical requirements after being called out of New York to deal with a situation upstate. While the team started taking out the ghouls, a spirit left it’s child inhabitant to find a more aged and tasty host.

With the last three issues focusing on ghoulish infestation at an amusement park, Burnham is either attempting to ruin the fond memories you have of the rides and games or to amp up your childhood fears. Whichever it is though doesn’t change that everyone is still locked within the grounds with no immediate option for escape. And just as they thought it couldn’t get worse Peter lets it be known that he is no longer in control of his body, but is now entering into a battle of the minds inside of his own.

The ensuing battle of words between Peter and the soul hungry sprit not only offered another look into the psyche of Venkman, but also provided a little lull between the pages of the battle raging in the physical realm. The pacing of these books has really been nailed down to create a dynamic and continually entertaining read. In the end the issue is wrapped up with a little humor but with no clear indication of where the next issue will take us.

I have been lucky enough to purchase ”the new iPad” and bought all my last weeks comics through the Comixology app. Comixology has begun delivering ”hd comics” to fully use the retina display and dang do they look good, Ghostbusters included. Dan Schoening’s art pops right off the page screen, which should be no surprise with his track record since issue one. He continues to draw distinct emotions for each of the characters, which is essential with this diverse group of main characters. But what would Ghostbusters be without terrifying entities, which Schoening draws just as well as his humans. My personal favorite from this issue was the giant jack-in-the-box clown that will make my memories of the already horrifying toy even worse.

What interests me is that this issue has the feel of a finale to an arc, but instead it is just the third part. These last issues have definitely set the tone for the Ghostbusters to be working outside of their general NYC setting, but unless this second arc is longer than the inaugural I’m worried that the next few issues will feel too rushed. With all the talk from Burnham and the foreshadowing after the issue in Peck’s files, I’m excited to see the team hit the road and rid the rest of the country of their paranormal issues. I’m giving this issue 3.5 out of 5 stars as this series continues to be a must-read for any fan of the movies and a book that should grab a solid followership amongst readers in general.