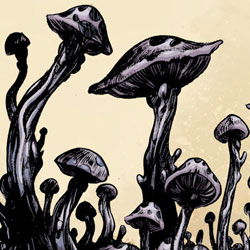 The Pickens County Horror promises to bring vampires to the pages of B.P.R.D. Hell On Earth. Do these bloodsuckers just suck or will you get your bang for the buck? That was awful, and I apologize.

Previously, in B.P.R.D. Hell On Earth: Horrible Lovecraftian monstrosities are devouring some of the world’s finest cities. Hellboy is dead, unless he isn’t, I missed the arc where that all went down. Whatever, the world is going down the tubes.

This is one instance where what’s printed on the cover is a pretty good indication of what you’ll find within – vampiric horrors slinking around in the mud of some backwoods county. Also, loads of toadstools. If any of that sounds like it’s up your alley, this is a book that you should check out.

A MASTERCLASS IN EFFICIENCY

The script from Mike Mignola and Scott Allie (well, I presume only one of them actually wrote the script, but who knows which?) crafts a creepy vibe from the start, introducing a skuzzy backwoods vampire clan against the backdrop of all the horrible goings-on elsewhere in the world. Our heroes for the story are a pair of perfectly human, perfectly powerless B.P.R.D. agents. I don’t recall either having appeared in the pages of the Mignolaverse before, but it doesn’t matter, as their histories and personalities are clearly laid out from the start. There’s some stuff about a creepy fog, creepy frogs, a possibly deranged academic and a whole lot of bloodsuckers waiting for some kind of revelation who are up to no good in the meantime. It is a very efficient issue, which is good, since this is a two-issue miniseries. Our players are all rendered distinct from the start, and the creepiness factor is ratcheted sky-high immediately. There’s a sort of dread that builds with each subsequent plot development, which is exactly what you want from anything trying to capture that Lovecraftian vibe.

WELCOME TO THE FOLD

Jason Latour is a welcome addition to the B.P.R.D. stable. There’s a certain DNA in the art in the B.P.R.D. books (I wouldn’t call it a house style). You can usually count on some stylization, chunky, slashing lines, a strong sense of shadow and darkness. Latour’s style is definitely his own, but it fits nicely within the Mignolaverse graphical wheelhouse. In the pages of this issue, he creates some gripping and disturbing art, without illustrating anything too bloody. The art he employs perfectly matches the creeping dread of the script, and I hope he continues to work with Dark Horse.

The Pickens County Horror is a good read for anyone who wants a good horror comic, whether you are familiar with the world of Hellboy or not. Big Red is mentioned once and what’s going on in the rest of the world is present on the margins, but pretty much everything that occurs in the story is independent of outside knowledge. That is why I do not hesitate to recommend this issue to fans looking to dip their toe into the waters of the Mignolaverse but who don’t know where to start. There aren’t any complicated characters with miles of backstory to learn in this issue; it’s just good, clean storytelling with bang up art, and it gives you a feel for what a good B.P.R.D story feels and looks like. I have argued in the past that the B.P.R.D. line is the most consistently entertaining horror storytelling in the business, and The Pickens County Horror is no exception, earning a coveted four and a half out of five stars. Take a look.