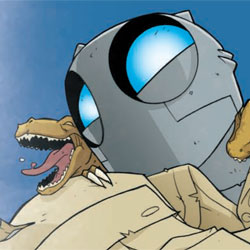 What could be better than another Atomic Robo series? How about TWO Atomic Robo series? This week kicks off a new Atomic Robo ongoing anthology series, that will run alongside the next Atomic Robo mini-series. With Scott Wegener absent from this series in order to keep up with the mini, with Robo still sparkle and shine, or will it seem like a rusty imitation?

Previously in Atomic Robo: Atomic Robo was created by Tesla in the 1920s, and has been alive ever since. If that isn’t enough to impress you, the automaton, has had adventures across time and space, fought the ghost of Thomas Edison, and matched wits with a talking dinosaur. Yes, it really is that much fun.

I really do like anthology series as it gives readers a chance to explore the world of a particular character in more detail without getting bogged down in series that have the potential to fall apart after six or seven issues. Real Science Adventures offers up a series of short stories featuring characters like The Sparrow (The Dogs of War), Doctor Dinosaur (Atomic Robo and Friends FCBD 2009), and Bruce Lee…no, really THE Bruce Lee.

Some of the stories appear to be one shots, like the very funny The Revenge of Dr. Dinosaur, that features everyones favorite reptilian (or is it avian?) villain going to extremes to get back at Robo following the Dinosuar Island adventure from a year or so ago. Others in the issue are multi-part stories, so readers will be able to follow a more complex storyline over the next six or so months. This should make the story telling interesting, especially when Bruce Lee and The Sparrow are involved. The one shot tales run the range between build-up to a great gag, to a reflective moment from Robo’s long history (referencing the FCBD 2008 short story), to something totally weird, that doesn’t quite make sense now, but given the way Clevinger is building the universe, each and every moment in this book will probably lead to a story arc or plot point down the road.

I had very serious concerns when I found out Scott Wegener wasn’t doing the art for this series, but given that he’s busy working on the Flying She-Devils of the Pacific, I can understand the desire to create a balance between “core” title and these smaller tales. I love Wegener’s style and have watched it evolve over the last couple of years to something I’m more than willing to plunk my hard earned money on to buy for display at Stately Spoiler Manor. So when Yuko Oda takes on Dr. Dinosaur, for example, my concern for the look and feel of the characters increases a great deal. Having followed these characters from the very beginning, I feel a sense of ownership and pride in the series, and I don’t want to see anything injure the property.

Fortunately, my fears and worries are unfounded as each artist does a great job in bringing Wegener’s words to life on the page. What I really like is that the artists are not trying to mimic Wegeners style – something we see happen quite often in the Hellboy series from Dark Horse Comics – and though it takes a moment or two to get used to the new look on many of these characters, I appreciate what each artist does in this issue.

BOTTOM LINE: DEAR JEEBUS, WHAT ARE YOU WAITING FOR?

You know the routine; a new Atomic Robo book arrives on the store shelves and Stephen goes on and on about why you should be reading the series. The broken record has been running since 2007, yet I’m still surprised when someone emails me to let me know they finally picked up the book after hearing or reading my words go on at length. And the reaction is always the same, “Finally picked up Atomic Robo after all your praise, I’m glad I did, this is fantastic!” So whether you believe me know, or believe me later, Atomic Robo is a property that is so special, so unique in its storytelling and approach to science, technology, and adventure, that I’m sure it will be around 50 years from now. Atomic Robo Presents Real Science Adventures is icing on the cake as it means even more Robo is in our lives. Pick up the book, and if you don’t know what is going on, go and buy all the previous volumes, you’ll be thanking me later.