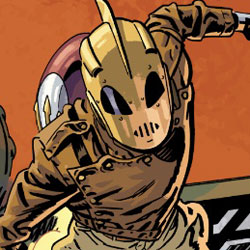 Waid and Samnee jump on The Rocketeer

I’m really happy to hear that IDW Publishing has opted to create an all new mini-series based on The Rocketeer property.  The two anthology series have done well, and show that there is still a lot of interest in the character.  At WonderCon 2012, the publisher announced writer Mark Waid and artist Chris Samnee will work on the series.

Everyone’s favorite adventure-prone jetpack owner, Cliff Secord, finds himself at the center of another adventure when a mysterious tanker pulls into L.A. Harbor carrying dangerous cargo.

Those who have been reading Marvel’s Daredevil have seen the team-up between Waid and Samnee and know what to expect.

“As someone who bought every Rocketeer comic the day they first came out, this is a dream project for me. Dave Stevens created a terrific, iconic hero who beautifully and uniquely spans the gap between the pulp heroes of the 1930s and the comic-book crimebusters of the 1940s”, said Mark Waid in a prepared press release. “He’s got a foot in both those worlds, and he’s a ball to write. And working with Chris Samnee was the part of IDW’s offer that sealed the deal for me.”

Samnee appears to be equally excited about the project. “I couldn’t be more excited to be drawing The Rocketeer. I’ve been a fan of the character, and a massive fan of Dave Stevens’s work since I was a kid, and getting a chance to draw him is a real dream come true. I can’t wait for folks to see what we’ve been cooking up.” And I’ll echo the same thoughts. From the moment I discovered the first Rocketeer book on the shelf I made every effort to track down everything featuring the character, and now I have something more to look forward to when The Rocketeer: Cargo of Doom! arrives in August.