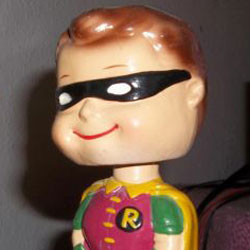 According to WhatSellsBest.com a vintage pair of Batman & Robin Bobbleheads sold on eBay this past week for close to $20,000. The two figure set is based on the Batman television series that ran on CBS from 1966 to 1968.