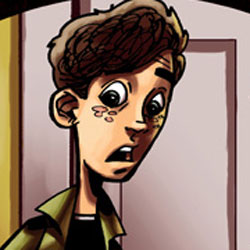 Alpha Girl #2
The action-packed second issue opens with our heroine getting her first taste of the new apocalyptic world. On the run from rabid women and mysterious men in black rubber suits, Judith flees to the suburbs where she meets Frank, a sex starved teenager with a horrible secret. Joining forces, the two teens set out to evade evisceration and find Judith’s brother!

Bloodstrike #26
Extreme’s zombie-black op-superheroes return! Cabbot Stone is the last unliving Bloodstrike agent, an unstoppable weapon in America’s war on terror! But being dead is a hell of way to make a living, and Cabbot is losing his faith. Will his latest mission be his last? Bloody horror-action with heart by Hack/Slash writer Tim Seeley and Artist Franchesco Gaston!

The Bulletproof Coffin: Disinterred #3 (of 6)
“AS FLIES TO WANTON BOYS…”
Coffin Fly rises again to join The Unforgiving Eye in a race against time as The Red Menace launches an attack on planet Earth. But who is really behind this nefarious plan for world domination? Could it be that we are all no more than playthings in the hands of a 10-year-old sociopath?

Carbon Grey Origins #2 (of 2) (MR)
“ORIGIN,” Part Two
A second anthology of short stories set in the CARBON GREY universe. A boy becomes a god in “Gottfaust,” mysterious events are investigated by “Marshal and Marshall” and a refugee becomes a queen in the tale of “Raisa.” Legends, secret histories and continuity errors ” all will be revealed in CARBON GREY ORIGINS.

Choker #6 (of 6) (MR)
ISSUE SIX: I DREAMT THAT I’D NEVER SLEEP AGAIN
Shotgun City’s real scumbags are finally exposed, and Johnny Jackson is hell-bent on making sure they get what’s coming to them. Trouble is, they’re not going out without a fight? Is Johnny as doomed as some of his closest allies, or will justice finally prevail? It’s a startling conclusion to one of 2010’s wildest books!

Cover Girls HC (MR)
This volume collects some of the best covers and other artwork from rising star GUILLEM MARCH (GOTHAM CITY SIRENS, CATWOMAN). More than one hundred full-color images featuring the sexiest girls from his stunning work for Eros Magazine or Playboy Spain, never seen in U.S., plus much unpublished art.

The Walking Dead #95
“A LARGER WORLD” CONTINUES
Rick and his group are welcomed into a new community, led by a new charismatic leader. Rick has experienced this before. Is this the beginning of a new era of peace for Rick and the others… or is this man every bit as dangerous as The Governor?