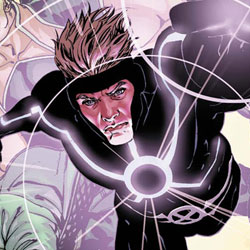 Polaris and Havok are now back in charge of X-Factor, as Jamie Madrox recovers from a slight case of death. Find out more about the changing status quo in this review of X-Factor #233.

Previously, in X-Factor: Thought to be killed in battle, Jamie Madrox has actually been tumbling through alternate realities until finally returning home, where he tumbled into the arms of a guilt-ridden Layla Miller. In his absence, prodigal bigwigs Havok and Polaris are now in charge of X-Factor.

CHANGE OF THE GUARD

This is a strange issue, featuring X-Factor in a government-sanctioned fight against anti-mutant bigots that has more in common with the 90s incarnation than the current private eye X-Factor Investigations set-up. Interestingly, the team (sans Layla Miller and Madrox, who are busy canoodling in a morgue, which is totally gross) handles the situation way more competently than usual, with coordination and solid teamwork. It seems like this may be a commentary on Multiple Man’s leadership qualities. There are also a couple scenes intimating a future conflict with the Isolationist.

The issue falls a little flat, unfortunately. The central battle with the human supremacists is a jarring tonal shift. X-Factor’s remit has been detective work for quite some time now. Returning to normal superheroics under Val Cooper’s watchful eye requires a little bit more explanation than we’re given, and a camp of anti-mutant crazies just doesn’t have the same narrative likelihood post-M-Day. I dig the leadership themes David is working on here, but the frame they’re put into does not fit. And to be honest, I needed more hand-holding with the Isolationist stuff. I don’t recall the guy (it seems he last appeared in issue 24?), I don’t recognize the character he interacted with (who was not mentioned by name), and it resulted in a complete drain of any possible narrative drama in those scenes. This is a rare problem for Peter David, a writer who generally captures character-driven drama as good or better than most scribes working the X-Beat. There’s still some good in the issue though – a creative, if blown, use of Siryn’s powers and a closing gag involving Pip’s web browsing habits. Use your imagination.

CROSSING THE LINE WITH TOO MUCH LINE

Leonard Kirk isn’t doing it for me on the artistic front. It’s something about his lines – they’re thick and overstated around the characters, creating an unnecessary separation from the generally well-drawn backgrounds. The result is a disconcerting and distracting effect, and it is especially detrimental to the characters’ faces. It is also regrettable that Polaris and Havok’s costume are so similar to their 1990s get-ups, complete with those ubiquitous yet nonfunctional head thingies. This contrasts poorly with the rest of X-Factor’s updated and streamlined costumes. Kirk does handle action well; the fight scene in the anti-mutant camp is dynamic and detailed. If that out-of-control heavy lining was reined it, it would look much better.

This issue feels like a rare misstep from Peter David; X-Factor is one of the more consistently entertaining books from Marvel. Still, there are a few nice moments in the issue, and it does lay the ground for a good conflict between Multiple Man on one side and Polaris and Havok on the other. A mediocre Peter David issue is still generally better than most, but unfortunately, my dissatisfaction with the art drags the final grade down a touch.  X-Factor #233 rates an average two and a half out of five stars.