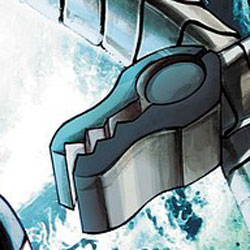 Peter Parker has had a wonderful year and things are really starting to go his way, which means it is time for the villains to step up…and save the planet?

Previously in The Amazing Spider-Man: Having saved New York City from a spider attack, saved a couple of astronauts, AND prevented an alternate timeline from becoming a reality, it’s time for Peter Parker to kick back and enjoy the his life. Of course Doc Ock has been secretly scheming behind the scenes, which can’t be good – especially since he’s got the ol’ gang back together.

ENDS OF THE EARTH

So will the world end by fire or ice? It’s a very interesting argument made by those that believe in a coming global super storm and carry out their arguments on late night talk radio. Dan Slott must have trouble sleeping, because he opens this issue with Equinox – a villain of both fire and ice, causing trouble, and it’s up to Spider-Man to save the day with a new invention that keeps everything at equilibrium (hint: foreshadowing). This then leads to some inner reflection by our hero on how all the great products being used by every day citizens of the Marvel Universe are the result of mother necessity helping Good Ol’ Peter Parker in his dealings with super villains. Then, as Parker arrives at work, we are given a quick look at six inventions that haven’t been field tested against the Sinister Six (hint: foreshadowing).

I really get a kick out of how Dan Slott gives Peter Parker those moments where he feels absolutely great about everything he does. It’s great because he’s able to counter that moment by having villains take a big dump on his sunny day. This time it’s Doc Ock who reveals his master plan – a solar lens that can fry half the planet! But instead of demanding to rule on high, Doc Ock announces he’s going to give his invention to the world as a way of reversing global warming. This plan seems to be working as everyone begins to think Doctor Octopus isn’t such a bad guy after all. This causes Peter’s head to spin, forces him to break out his new Spider-suit, and head to Avengers Mansion to rally the troops.

I’m only guessing that Slott is foreshadowing a lot of the big moments in this issue, but he could be pulling the wool over the readers’ eyes just like Doc Ock did with his offer of world aid. In any case, I still get a kick out of seeing Peter deal with his superhero life and his normal life in a way that gives us the idea that we really are dealing with two different people all the time. And unlike those who prefer to read the adventures of the hero and not the citizen, I honestly do like both. The Life and Times of Peter Parker is going to make a great series for Disney XD someday.

A SPIDER-SUIT OF MANY COLORS

I have lost count on the number of different Spider-suits we’ve seen since Slott shook things up all those months ago, and I’m to the point that a new suit, superbly drawn by Stefano Caselli, doesn’t really surprise me anymore. And I’m even more surprised that the heroes are shocked to see Peter in his new threads each and every time.

“Spider-Man! Is that you?”
“Duh! You should know what a costume change looks like, Tony… (dumbass)”

Throughout the book, Caselli shows his mastery of composition and layout, and his character work is fantastic. His take on Doc Ock is nothing short of scary old folks home, and that visage is more terrifying than seeing people suffer from the effects of baking the planet.

If I had one complaint about the art overall it’s the color that tends to make some panels and characters look out of focus at times. This could be intentional, but it was distracting to me at many points throughout the issue.

BOTTOM LINE: THE BEGINNING OF THE END BEGINS HERE!

This arc kicks off one of the bigger Spider-Man events in a number of years (or so Marvel tells me), and considering there is a new movie coming out, Spider-Man is celebrating his 50th anniversary, and a new Spider-Man animated series kicks off next week on Disney XD, I have a feeling Slott is going to give us one heck of a ride for the next eight months. The Amazing Spider-Man continues to thrill with each issue, and I’m giving issue #682 4 out of 5 Stars. Pick it up.