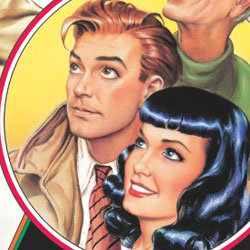 We loved it so much the first time, they’re brining it back around for another run (followed soon after by another). As is often the case with follow up events, one wonders if IDW Publishing has scored again with Rocketeer Adventures 2, or if this is a huge embarrassment for Rocketeer fans?

Previously in The Rocketeer: Cliff Secord discovered a stolen rocket-pack in his aeroplane, and always looking for a way to do something fun (and impress his on again/off again girlfriend Betty), takes to the skies as THE ROCKETEER! Along the way he fights mobsters, dodges the likes of Doc Savage and Lamont Cranston, and actually does some hero stuffs.

One of the big problems about being a vigilante in The Rocketeer’s world, is that the police and army still see him as a menace and want to bring him down. While taking on a pair of Nazi pilots, Cliff crash lands in a small town, and in the process saves a young boy’s life. While sleeping off a concussion, the town folk discover who the Rocketeer is, and decide to turn him into the authorities. It’s the wise and heartfelt plea by the young boy, who turns the town around, and when he’s well enough, Cliff is sent on his way.

This opening chapter is everything a Rocketeer adventure needs; action, drama, and considering the time period this story takes place, a big heaping helping of apple pie, ice cream, and patriotism. The story by Marc Guggenheim hits all the right notes, even if Secord is missing for a chunk of the story. The art by Sandy Plunkett is stellar and once again reminds us of the great artist we lost in Dave Stevens.

Remember when Daffy Duck fell asleep and dreamt he was Dick Tracy(The Great Piggy Bank Robbery (1946))? Remember how much you laughed and hooted at the antics? That really doesn’t happen here. Peter David takes the Merrie Melodies classic and puts a pretty good spin on it, and with his dialogue there are moments that bring a smile to your face. The Rocketeer is on everyone’s lips and it makes sense for H’wood to capitalize on it as much as it can. I like that we get the spirit of the Looney Tunes short, along with off panel commentary by a couple of audience members who later turn out to be Betty and Cliff on a date.

It’s just too bad the art killed any enjoyment found in this installment. Your mileage may vary, but if you are going to ape a well known cartoon series and characters, it would be nice if the art aligned.

A DREAM OF FLYING

The final story in this issue is by Stan Sakai, and on the surface one might think his art and storytelling don’t align quite right with this property. You would of course be completely wrong.

While flying, Cliff is shot down by a young man with a gun. When Cliff crashes into a barn, and the rogue holds Cliff at gunpoint saying he wants the rocket pack to build his own improved model, it certainly fits with a day-in-the-life mishap Cliff might encounter. The story grabs the young reader, when a young boy arrives on the scene and gives Cliff the moment he needs to knock the cad out. This story steps it up a notch, when Cliff gives the young boy a ride and flies him through the skies as a thank you for the assist.

The story becomes brilliant when you realize the lowlife’s name is Lex, the young boy is wearing red and blue, and lives with an older couple, one of which is named Martha. It’s one of those reveals that builds as the story unfolds, and it’s only when the last panel appears that it all comes together. Bravo Mr. Sakai. Bravo.

BOTTOM LINE: THANKFULLY THIS IS EMPIRE STRIKES BACK AND NOT THE NEXT KARATE KID

When the first Rocketeer Adventures wrapped, I was a little sad to see it go, but when it returned in this new volume, I was concerned that IDW Publishing was rushing something out to capitalize on the success of the first, but without the care and thought that went into the first non-Dave Stevens series. Thankfully, this book is a lot of fun, full of spirit, and has me looking forward to the next installment. If you are a casual fan of The Rocketeer, you might be hesitant to pick this issue up, but it is worth your time and money.