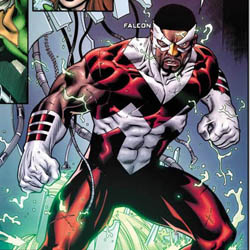 With the upcoming Avengers Vs. X-Men crossover, this four-issue limited was solicited as significant, a stepping stone towards the inevitable fighty-fighty.  In truth, it’s both much more and quite a bit less than that…

Previously, in Avengers – X-Sanction:  Although seemingly killed during the big X-Men crossover before last, Cable has returned from the future with a certainty that the Avengers are going to kill his surrogate daughter, Hope.  First, The Avengers arrived and fell into his trap, and eventually the X-Men also dropped into his hands (which, by the way, are quickly become ravaged by the techo-organic virus that he has carried for years.)  Cable’s endgame draws close, and Captain America and Cyclops are on site for the fireworks.  Will this light the fuse for AvX?

The story opens with a cameo by the New Avengers (The Thing, Iron Fist and Luke Cage), for the sole purpose of giving Wolverine someone to boss around, or at least it seems that way from the sequence of events.  Three generations of Summers’ get involved in fighty-fighty that alternates with serious angsty melodrama (even by X-Men standards), as Hope reads Cable’s mind and realizes that he doesn’t expect to survive this mission.  As interesting as it is to see Ed McGuinness working on Marvel’s biggest and brightest (his Falcon is pretty cool, I’ll grant you that), I just can’t justify that as the impetus for the book.  Cyclops and Cable’s father/son dynamic is interesting, but I don’t recall them being this close the last time they appeared together.  Granted, I haven’t read all the X-titles, but I’m not sure that anyone can be expected to do so anymore.  Cable’s master plan is quickly unraveled by his daughter, and once things start going south, it’s all gritted teeth and posturing until the end, and there’s a big reveal that has already been spoilered pretty much everywhere, and has been foreshadowed for several years already…

AND THE COSTUMES ON THE COVER AREN’T IN THE BOOK…

The battle sequences are probably the best part of the book, but at 20 pages, I’m hard-pressed to see why this book cost a dollar more than usual (other than Jeph Loeb costs extra $$$) and even though most books are 20 pages, this one is particularly sparse in terms of plotting.  With a big fight between their teams on the horizon, it completely ignores any foreshadowing of tension between Captain America and Cyclops, while no-selling any possible resentment between Cyclops and Wolverine, who were literally tearing each other to pieces less than five months ago.  Aside from the fate of Cable (which wasn’t an issue until this series) there is literally nothing going on in this issue that will have any lasting consequences.

The past four issues were big, loud and dumb, as well as overpriced and overdesigned, and this issue was no exception.  Hope’s secret has been out for a while (I think even Bishop hinted at it), Cable’s fate never really seemed to be up in the air, and the Avengers were pretty much spectators with a few tough-guy lines (Red Hulk’s John Wayne routine about burning out the poison with fever is especially suspect to me.)  Avengers: X-Sanction #4 comes across as a big money-grab with little to redeem it, not upsetting or offending, but simply boring the pants off me for 1 out of 5 stars overall.  I had hoped the ending would give us at least some tension for the upcoming AvX crossover, but even that is absent here…