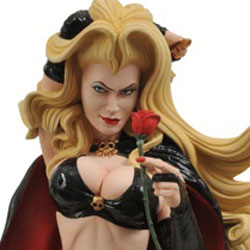 The Chicago Comic and Entertainment Expo (C2E2) runs from April 13-15 this year, and once again Diamond Select Toys (DST) will be in attendance! And since it’s also the 10th anniversary of Minimates, they’ve got some great events planned! Second of all, there will be a sweet exclusive figure for sale — our Femme Fatales statue of Lady Death will be made available in an “Alive” version, featuring the legendary comics character when she was brought back to life for a brief time! The 9-inch PVC statue will cost $45, and is strictly limited to 100 pieces. (First come first served, DST Booth, #311)

Third of all, there will be a top-secret Minimates giveaway every day when the show opens! Go to the DST booth first thing when you arrive, because these will go fast, and once they’re gone, they’re gone! There will even be a certain special something given out with each Minimate, but you’ll have to show up to find out what it is! Plus: Free Minimimate posters, a different one every day! (First come first served, DST Booth, #311)