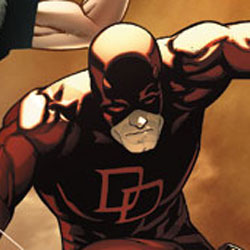 Marvel sent Major Spoilers a sneak peek of the upcoming Avenging Spider-Man that kicks off the Omega Effects arc.

AVENGING SPIDER-MAN #6 (FEB120575)
Written by MARK WAID & GREG RUCKA
Pencils by MARCO CHECCHETTO
Cover by STEVE MCNIVEN
“Trust no one… Hurt everyone” – The Omega Effect begins here! Spider-Man, Daredevil & The Punisher, find themselves in an epic chase across Manhattan for the all-powerful Omega Drive! But can the three of them put aside their differences before the Omega Drive falls into the wrong hands?