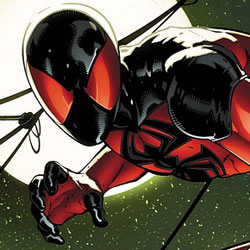 Peter Parker clone Kaine has been in Houston for only a couple weeks, what sort of mess has he made for himself in that time, find out after the jump. . .

Previously in Scarlet Spider: Kaine arrived in Houston on his way to Mexico to stop a drug dealer and get his cash. In the process he saved an illegal immigrant, Aracely, from a fire wielding villain, Salamander, who was going to sell her. He also managed to save Dr. Donald Meland, after the doctor saved Aracely, and then found out that Aracely would be deported right back to the hands of Salamander without Kaine’s aid. Now, convinced by the doctor and the senior officer, Officer Layton, to help, Kaine has taken Aracely into hiding and is now protecting her and the city as a costumed hero.

NONE OF THE RESPONSIBILITY

The tag for this book is a riff on Peter’s usual mantra of “Great Power and Great Responsibility” stating that Kaine’s only utilizing the first half…well that’s not entirely true as Kaine has reluctantly started to take responsibility for his own actions, as well as the safe-being of Aracely and just being a general hero-type in the city.

The book opens with Kaine rescuing a woman from a mugging and scaring the mugger out of the city. Kaine’s brutal methodology is followed up with his assurance to himself with that’s how Spider-Man would have handled it followed by instant karma in a crash landing due to lack of sky-scrapers. This was a reassuring moment for me as it both leveled the mood out from the grim-dark to some humor while allowing setting establishment that I was concerned would be overlooked.

Next we bring one more person into the supporting cast, the apparently necessary red-head for Spider books. Again, Yost manages to give us a good mix of the reality of the situation with Kaine needing someone to watch over and translate Aracely as she only speaks Spanish. The red-head is Annabelle Adams, bar tender at the hotel Kaine is living at and after much disbelief she is willing to help out. The entire affair turns out quite funny as Aracely has finally awoken again and attacks Annabelle thinking Salamander has returned. Once Dr. Meland arrives things calm down then he and Kaine head to the hospital to steal some supplies for Aracely.

At the hospital, we get a good bit of character development and interaction between Kaine and the doctor. The best part of this is the reveal that Dr. Meland and Officer Layton are husbands and Kaine’s reaction to it. Kaine mostly stopped mid-thought and did a double take of surprise, which is exactly the reaction one would expect for that reveal in that region of the country. The reveal is cut a bit short as Kaine has to save the doctor from a sniper, an assassin hired by the husband and father of car accident patients Dr. Meland failed to save. Here we get a great action sequence with Kaine effectively using the stealth mode on his suit as well as being quite a bit more brutal than Peter ever is. During the fight though, the assassin manages to hit Kaine in the face with a gas forcing him to remove his mask. The assassin is part of the guild that Kaine was a member of back when and recognizes him before getting away setting up where the story goes next. While this was the weakest part of the book, having Kaine get tagged like that, it still sets up how far Kaine has to go for redemption as his first thought after revealing himself is to kill the assassin so he can’t report it.

Stegman does a great job of showing how brutal and intense Kaine’s fighting style is compared to Peter. He makes Kaine look tense in almost every situation and it works rather well for the character. The digitizing look for Kaine going into and out of stealth mode was a bit weird, but the overall effect worked well. The people are very individualized and recognizable and the background details work really well, especially the early dawn skyline in the first few pages. The book looks great throughout and my only complaint is the costume design itself, I liked Peter’s/the earlier look better.

Yost has been doing a great job with this title. The story is entertaining, the people are interesting and believable, and I can’t wait to see more. Heck, he even set up the doctor/officer relationship two issues ago without me noticing. Great artwork and a fun, enjoyable story earn this title 4.5 out of 5 stars. The only point that makes me wonder is how easily Kaine is willing to take off his mask in front of people, though that might be another great piece to the character in the future.