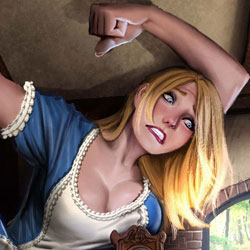 SOLICITATIONS: Zenescope Entertainment for May 2012

Zenescope Entertainment sent Major Spoilers the cover images and solicitation information for titles arriving in May 2012.

The Jabberwocky has been defeated.  The Queen of Hearts is dead and Wonderland is in a state of chaos with no ruler on the throne.  Enter the Red Knight who is determined to destroy all of Wonderland and the world at large by unleashing a deadly ancient force long thought to be gone.  Meanwhile on earth, a literary student researching Lovecraft will discover a long forgotten secret that could save or damn us all.  Don’t miss out on this incredible mini-series that sets the stage for the future of Wonderland! Featuring covers by Zenescope superstar artist Anthony Spay and long time Wonderland fan favorite Rich Bonk.

The end of the beginning is here as Alice finally confronts the ruler of Wonderland and faces off against her greatest fear.  With the fate of both Wonderland and earth at stake, will Alice find a way to defeat madness in its purest form or will she fall to victim to the Jabberwocky’s sinister machinations.  The final chapter is here in this oversized issue.  Includes over an unbelievable tri-fold Last Supper Tea Party cover by Zenescope artist Anthony Spay!

Magic gangs fight for control against government forces seriously out of their depth. Even with Piper, Phoebe, and Paige on the case, there is little they can do without their own magic. Overwhelmed and outnumbered, the side of good must hang all their hope on the single most powerful witch in the world.

Start reading from the very beginning of Zenescope Entertainment’s longest running series with this massive collection. Experience the uniquely twisted fairy tales from the minds of Joe Brusha and Ralph Tedesco. Follow the heroine Sela as she uses the classic tales of old to lead modern day men and women to the right choices while combating the lure of evil. Collecting issues #1-50 of the hit independent series.

When Baba Yaga gives a writer the unusual power to control those he writes about, the incredible gift proves to have consequences far worse than he could have imagined. Meanwhile Baba Yaga has long sought control over the nexus and Earth itself and she may have finally found the one item that will reveal the secrets of the universe to her. One which will allow her to stay one step ahead of all her enemies. This issue features some of the top cosplay ladies in the industry and takes place during one of the biggest conventions in the Southwest: The Phoenix Comicon!

Sela sets off in search of the Tomb of Death and finds herself joined by an unlikely ally who is also searching for a way to redeem herself from the failings of her past.  But will this new ally be enough to help Sela defeat the dreaded black ghost knights who guard the swamplands that lead to the Tomb?  Meanwhile, Alicia, Baba Yaga, Venus, and the Goblin Queen begin the final stage of their mysterious plans to rule the four realms and the very nexus itself.  The final count down to the Grimm Fairy Tales 75 begins here.  Don’t miss out!

As the race to recruit the false bloods on earth begins to heat up, Baba Yaga and the Sea Witch join forces in order to unleash a powerful being who could not only tip the balance in the battle between the forces of good and evil but may very well threaten all life on Earth.  It is a being known only as…HELIOS. Featuring the very first appearance of a brand new villain whose existence will change the Grimm Universe forever.

Awakened from his 65 million year hibernation, the evil alien overlord Zalex is ready to resume his conquest of the universe and he’s starting with the earth. Backed by his army of evil, mutated Dino-soldiers there’s nothing that can stop him….nothing but Jurassic Strike Force! Don’t miss the first adventures of the team in the first original series under Zenescope’s Silver Dragon Books imprint.

Zenescope’s entire Beauty and the Beast story arc is collected together for the first time!  When Edward finally moved away from his abusive home life, he thought he had escaped the cycle of violence that was his life.  But when his younger brother dies, Edward must come back to the one place where he thought he would never return.  Now as Edward faces the monster who ruined his life, he will learn that sometimes the apple doesn’t fall far from the tree.  This unbelievable trade paperback collects Grimm Myths and Legends issues 12 through 15 and Grimm Fairy Tales issues 13 and 14.

Issue 3 begins right where issue two left off as Mowglii is dealing with a harsh truth and remembering how things once here. She later finds herself in the clutches of the enemy. But, through chaos, may just find an opportunity to escape. All eyes are on Mowglii as she struggles through the trials she is faced with.

The hit series that redefined the zombie genre continues…  Vanessa and her partner continue their search for the serial killer who has found a way to beat “the Waking” as the body count continues to rise. Meanwhile, Madison continues to stalk Vanessa from the shadows with a message from beyond. From the writer and creator of FLY and the Theater comes a new chapter in the horror tale that never sleeps.