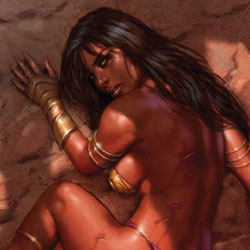 Dynamite Entertainment sent Major Spoilers a sneak peek of titles arriving in stores this week.  Take the jump for a look at Warlord of Mars #16, Dark Shadows #4, The Ninjettes #2, and Nowhere Man #2.

WARLORD OF MARS #16
32 pages FC  •  $3.99  •  Mature
Written by ARVID NELSON
Art by EDGAR SALAZAR
Covers by JOE JUSKO (50%), LUCIO PARRILLO (50%), STEPHEN SADOWSKI (1-in-15)
“Risqué art” Retailer incentive cover by ALÉ GARZA
“Martian Red” Retailer incentive cover by STEPHEN SADOWSKI
John Carter is finally united with the son he never knew. The two of them face bloody death in the great arena of Issus, Goddess of Life Eternal. No one has ever escaped from the arena of Issus before, but Carter and his son might have a thing or two to teach this false goddess about religion — the old fashioned way, at the end of a sword point! Hair-raising escapes, devious villainy, and an embarrassing revelation or two await you in Warlord of Mars Issue 16: Flight and Pursuit!

DARK SHADOWS #4
32 pages FC  •  $3.99  •  Teen +
Written by STUART MANNING
Art by AARON CAMPBELL
Covers by FRANCESCO FRANCAVILLA (50%), AARON CAMPBELL (50%)
A killer is stalking the streets of Collinsport as vampire Barnabas Collins finds himself in a race against time to save the Collins family from a dangerous force. As his eternal nemesis, the witch Angelique, makes her new bid for eternal life, Barnabas and Julia must work out what links Barnabas’ dreams to the mysterious
statue in time to prevent a tragic death.

NOWHERE MAN #2 (of 4)
32 pages FC  •  $3.99  •  Teen +
Written by MARC GUGGENHEIM
Art by JEEVAN J. KANG
Cover by MARKO DJURDJEVIC
500 years in the future when citizens’ thoughts are monitored by a centralized super-computer and crime has all but been eliminated, the mysterious and violent death of an individual is cause for significant alarm. This is whole new terrain for the ill-equipped security forces, especially when what appears to be a homicide investigation leads to evidence that someone’s mind is off the grid, raising the tantalizing possibility that absolute security – and the world in general – is not all that it’s cracked up to be. Acclaimed writer Marc Guggenheim presents part two of his original series Nowhere Man, where the mystery only deepens and action picks up.