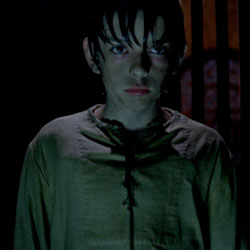 SNEAK PEEK: Merlin – A Herald of the New Age

Is it the emotional strain of knowing his sister has been banished by the King he protects, or is something even more sinister – and otherworldly – torturing Sir Elyan?  It’s a question the other Knights of the Round Table ask themselves in “A Herald of the New Age,” an all-new episode of MERLIN that airs Friday, March 9, at 10 p.m. ET/PT, only on Syfy. Elyan is bound by duty and honor to serve and protect King Arthur – but after a stunning betrayal of the heart, the King banished Gwen from Camelot, and that has taken a toll on Elyan, played by Adetomiwa Edun.

After returning from a journey through the forest, the Knights discover Elyan is not himself.  On their way back to Camelot, they visited aDruid shrine – and unbeknownst to them, a ghostly Druid boy is haunting Elyan … which could have deadly consequences for Arthur. Elyan and the Knights take center stage in “A Herald of the New Age” – which the jocular actors who play the gallant warriors of Camelot say they welcome, particularly Edun, who joined the cast in the third season after having been a fan of MERLIN.

“I did watch Merlin before – ,” he begins saying during a group interview, before suddenly breaking off his sentence. “Sorry, I’m sorry – I’ve got Eoin Macken (Sir Gwaine) here making the most extraordinary faces.

“Yes, I did watch the whole three seasons,” he continues, laughing. “This series has a really supportive fan base, which is awesome. I think a lot of girls are very jealous of EoinMacken’s hair – I get a lot of questions about what products he uses.” Edun, Macken, Rupert Young (Sir Leon) and Tom Hopper (Sir Perceval) play the remaining Knights, and they have formed a close-knit bond, both on-screen and off. “What’s genuinely great about working on Merlin is that the actors are all of a really high caliber,” says Dublin-born Macken. “Colin Morgan and Bradley James, in particular are both brilliant, and it’s always great working with them – and, as people, Colin’s Irish, and Irish people are generally great, and Bradley’s British, and that’s cool, too.”

In “A Herald of the New Age,” Elyan engages in a spectacularly physical sword fight with Arthur – and Edun says he enjoyed the opportunity to show off his swordsmanship much more than shooting the episode’s opening scene in the forests of Wales, where many of MERLIN’s exteriors are shot.

“I love all the stuff out in the forest,” he says, “but it can be quite cold – sometimes as low as 10 degrees Celsius – and I’m definitely solar-powered.”