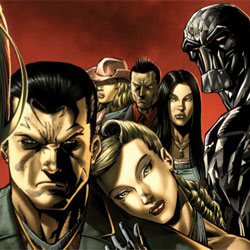 In May 2012, comic book publisher Big Dog Ink will take a step into the future as well as into the dark as they release their monstrous new miniseries, URSA MINOR.

After a pack of werewolves assassinates the President during the televised inauguration, nature’s supernatural balance is shattered as the vampires come to the aide of mankind. Now one girl, with a power she can barely control, sets out to fix what has gone horribly wrong the only way she knows how. Kill them all.

“The horror genre has always been a part of my life starting when I was young and probably nowhere near old enough to be watching some of this stuff,” says writer Tom Hutchison. “And Ursa Minor takes facets from horror movies I grew up with like the Hammer features as well as classic American movies and mixes it with everything else I was exposed to and ultimately loved as a kid; monsters, comic books and even the pinup model.”

“I’ve always known I had a horror story to tell,” Tom Hutchison adds. “Ursa Minor has been percolating and developing for a couple of years now and I believe I’ve found a fun way to play with these amazing concepts and have added my own small twists to the lore of vampires and their brides as well as werewolves and other forms of lycanthropy.”

Luck was with us as the scripts came together. Artist Ian Snyder had just recently come off of a previous project and was ready for something new. “It’s got a little bit of everything: strong women, strong men, fantasy creatures, violence, humor, peculiar imagery,” Snyder said. “There’s something in it for everyone.” Ian has grown by leaps and bounds since his early days and there is no one we would rather have drawing this book.

Big Dog Ink Publisher, Tom Hutchison, added, “Ursa Minor is a labor of love and every word I write takes this story in new directions and leaves my head spinning with all of possibilities as we continue to explore our now twisted and warped Future Earth. It’s become a bit more epic as it has developed and I wouldn’t have it any other way.”

Ursa Minor #1 will release in May, 2012 with a special release party at the Phoenix Comic Con where attendees and fans will have the opportunity to get a very limited edition Eric Basaldua cover and have it signed by many of the creative team including writer/creator Tom Hutchison, artist Ian Snyder and cover artist Ebas! A full 22 pages priced at $3.50, and will be available for pre-order in the March 2012 Diamond PREVIEWS catalog. The comic book will be in full color in standard comic book format. It is rated PG-13 for mature themes and violence. This will initially release as a 6 issue miniseries but we are very excited about this book and have plans for much, much more! About Big Dog Ink
Founded in 2009, Big Dog Ink (http://www.BigDogInk.com) is the publisher of comic book properties such as PENNY FOR YOUR SOUL, CRITTER, and the upcoming zombie apocalypse story, REX: ZOMBIE KILLER. Big Dog Ink’s new hit series, THE LEGEND OF OZ: THE WICKED WEST, charted in the “Diamond Top 300” list in November of 2011 and January of 2012.