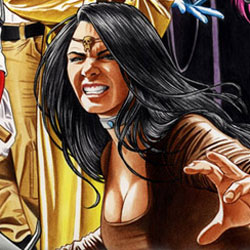 The first new SAINT comic book in America in over 60 years!
Soon to be a major television show!
The Robin Hood of modern crime returns!
He robs from the evil and heartless rich, and gives to the wronged and deserving poor–in the process, keeping a percentage for his own expenses. He doesn’t work for the law, the government, or anyone else. He is a lone wolf…an adventurer, a detective, a rogue, but always…a gentleman!
In “The Sizzling Saboteur” – The Saint travels to Texas in pursuit of a man who has been sabotaging weapons factories, but when his quarry turns up burned to crisp, he has to contend with both the local police, a trio of mysterious men behind the sabotage, and a beautiful Russian.
This issue is a preview of the upcoming graphic novel, and it will be the only time this story will be seen in color, so get it while it’s hot!
(2 covers, A= 80%, “smoking purple cover” B= 20%)

Real Gods don’t get nailed to crosses, they bludgeon their enemies to death with giant hammers. Featuring a guest appearance by Blackest Terror! The second installation of Esquivel and Sarabia’s thought provoking and hilarious Modern Myths series.

This flip hardcover contains the two issues Wyatt Earp vs Cisco Kid and Cisco Kid vs Wyatt Earp. It’s a one of a kind story told by two different point of views!
On October 27th, 1880, Wyatt Earp arrested William Curly Bill Brocious for shooting the Tombstone town Marshal. But on the way to trial, some tell of a dangerous encounter with a mysterious outlaw called the Cisco Kid. Did the paths of these two legendary gunslingers cross somewhere in the southwest? If so, whose side of the story should we believe? Myth meets history in this fantastic Western showdown!

Julian and crew charged recklessly into battle with the Eretradium mercenaries and have their behinds handed to them, but who are the pair of white knights that saved them from their foolishness? Will they ever recover the increasingly dangerous Eye of Ancev? Find out in this thrilling conclusion!
Moonstone presents a creator-owned effort from Mark Sparacio (Captain Action, Jonah Hex) and newcomers Ian Ng and Abe Melendez, in full color.
Two Covers (50/50 split)