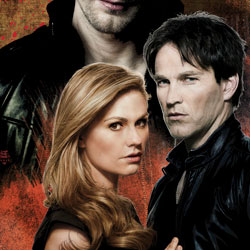 The sizzling collaboration between IDW Publishing and HBO heats up again! Proving that there are helpings yet to be had in this buffet of twisted Southern hospitality called TRUE BLOOD, comics luminaries Ann Nocenti, Michael McMillian, and Michael Gaydos are joining forces with series creator Alan Ball to take readers on a brand-new ride through the supernatural underbelly of Bon Temps, Louisiana, in an all-new ongoing series beginning in May.

“I’m so happy to come back to work on the TRUE BLOOD comic,” says McMillian, co-writer of the Tainted Love limited series. “The show’s mythology has become vast and rich over the past few seasons, and our plan is to explore every corner of the vampire universe, past and present. Ann and I are eager to make it a must-read companion piece to the TV series.”

In Where Were You?, the series’ first arc, readers will learn the beloved cast of characters’ roles in and reaction to the “Great Revelation”; the day when vampires revealed themselves to the world, which makes TRUE BLOOD the devilishly unique and dynamic series it is. Loved by fans and critics alike, TRUE BLOOD has become a force in both comics and television with a mythology sure to thrill and delight for years to come.

“As a fan from the jump, I was thrilled to come onboard to contribute to the lovely nastiness that is TRUE BLOOD,” says Nocenti, a comics veteran best known for her ground-breaking run on Daredevil. “Working on the comic with Michael has been a revelation, he generates amazing stories and packs them with must-read tidbits and I’m lucky to be along on this ride.”

Renowned artist Tim Bradstreet (Vampire: The Masquerade, Hellblazer) rounds out the team, providing striking covers for the series, which will also feature hugely popular photo covers for each issue.

“We couldn’t be more pleased with the amazing success of the comics,” stated James Costos, VP of HBO Global Licensing.  “IDW has been a terrific partner and continuing with the ongoing series is a true testament to the quality of the product and reach of the True Blood brand.”

As if all of that wasn’t enough to satiate the comics’ growing community of fans, IDW and HBO is pleased to announce the impending unleashing of TRUE BLOOD: THE FRENCH QUARTER, a hardcover collection of the last New York Times best-selling miniseries. As a vicious murderer tightens his noose around New Orleans, emotions collide in what’s quickly become a high-humidity romance for the ages! HBO Licensing & Retail officially licenses the HBO® brand for the development and merchandising of innovative product lines inspired by the network’s award-winning programming. With products created around classic series like the The Sopranos® and Sex and the City® to current hits like True Blood®. True Blood products include the luxury handbag line Hammitt for True Blood, tarte for True Blood makeup collection, the Tru Blood Beverage in the original glass and new plastic bottle, a high-end headphone line V-MODA for True Blood as well as fashion apparel, jewelry, glassware, digital and CD soundtracks. Merchandise can be purchased in retail stores nationwide, at http://store.hbo.com, and at the groundbreaking HBO retail hub, the HBO Shop®, located at 42nd and 6th Avenue in New York City. HBO Licensing & Retail products are also sold internationally across Europe, Asia and Australia.