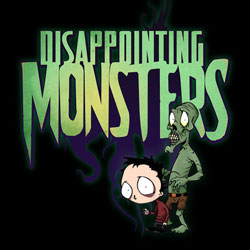 What happens when an acclaimed indy comic artist goes to see one of his favorite indy bands play? Artist chats up musician in the ally behind the club and the two find they have a shared interest in comics, sci-fi, and horrific things that go bump in the night. Oh, and Calvin & Hobbes, too!

No, it wasn’t just a night of great music for Arizona-native Daniel Bradford, fan of Toronto synth-pop band The Birthday Massacre (www.thebirthdaymassacre.com). According to Disappointing Monsters artist Bradford, he and Canadian keyboardist Owen Mackinder hit it off immediately.

“I showed him my comics and he showed me his Boba Fett mask,” explains Bradford.

No stranger to monsters, Bradford is the co-creator (with Thomas Hall) of two of the most popular indy comics of the past few years, KING! and the award-winning, download-topping R-13, aka Robot 13. Both characters are known for their monster-fighting prowess, and just may become as iconic as Boba Fett someday.

As usually happens when like-minded fantasy fans meet, a creative collaboration was born. “We decided to work on a comic strip together,” continues Bradford. We took the idea from a daily strip I used to do in college and retooled it, giving the main characters different names, adding more characters to their world, and making it really funny.”

Bradford credits Disappointing Monsters scripter Mackinder for the humor infusion. In addition to writing, Mackinder also handles some of the art chores: while Daniel does the pencil art and finishes it with ink, Owen letters and colors the strip.

“With Owen’s humor and our combined artistic talents, we feel we really created something fun,” says Bradford.

Disappointing Monsters can be found online at www.disappointingmonsters.com. The strip is about a young boy named Gilbert and his zombie friend, Edison. Other “friends” pop by from time to time including Cthulhu – an elder god with a Napoleon complex living in Gilbert’s closet. Those checking out Disappointing Monsters for the first time can quickly become acquainted with the cast by clicking on the “New Readers” tab, a special page on the site that gives the background of all the key characters.

Since launching the Disappointing Monsters website in April, 2011 Mackinder and Bradford have delivered one comical strip after another and built up a very loyal fan base. Each new strip posts an average of 1000 hits on its launch date, with many repeat visits.

The series also recently became the recipient of a special honor: it has been nominated for a “Ghastly Award!” The Ghastly Awards (http://ghastlys.blogspot.com) are an annual horror comic award with the nominees submitted by fellow comic creators.

“We’re honored that other talented creators whose work we love would consider our strip worthy of a nomination,” exclaims Mackinder.

Winners of the Ghastly Awards will be announced on March 31st, but for Bradford and Mackinder, it’s enough being nominated.

“Putting out a web comic today is not a novel idea,” explains Mackinder. “Sticking out in a field that now includes a vast universe of internet funnies is like finding a needle in a haystack, so any notoriety we gain just means readers have found us – our primary goal.”

While Gilbert and his fiendish friends have become virtual favorites, fans will soon have an opportunity to find Disappointing Monsters on real-world bookshelves, too. Plans are underway for a paperback collection that will compile the web comic series and also contain exclusive strips and other material. A tentative release date of late 2012 has been set for the book.