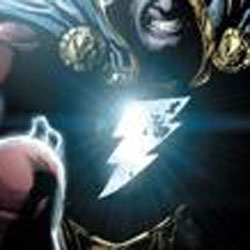 The New York Post has released the first image of the new look for Shazam! and he now sports a hoodie in his costume.

Of all the ways to change a costume, that is certainly one of them.  Instead of a cape, it looks like Shazam will now wear a cloak, which is always fashionable regardless the season. It’s interesting to note that Clark Kent/Superman wore a hoodie in Superman: Earth One, so maybe the creators are thinking lightning will strike twice with this fashion redo (see what I did there? Of course you did, because you, Dear Reader, are awesome).

“With SHAZAM! Gary and I will be focusing on the magic hero instead of the super hero,” [Geoff] Johns told THE SOURCE. “For centuries, science has ruled the world, but now magic is returning. We’re telling the story of the hero’s young alter ego, Billy Batson, a foster kid at a crossroads in his life. The question is, how does the emotional journey of this troubled teenager collide with the fate of the world? The Rock of Eternity and the legacy of SHAZAM! will be explored in a different way as the extent of Billy’s connection to the magic world around him is greater than ever before. The story will have a profound impact on Justice League later in the year and you’ll see new characters, locations and creatures along with the classics from the SHAZAM! universe. Billy’s friends and enemies will be along for the ride.”

Shazam’s new look kicks off in Justice League #7 that is scheduled to arrive March 21, 2012.