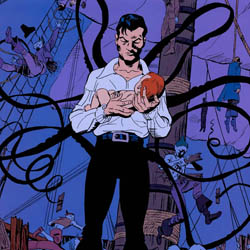 The path from Victorian neer-do-well to undying creature of shadow has been a long one for Richard Swift.  For all the tales James Robinson has told of the Shade’s century-and-a-half of life, we’ve never seen the moment where the balance between flesh and shadow turned irrevocably to the side of darkness…

Previously, in The Shade:  Richard Swift, the immortal Shade, has been puzzled to find that someone who shares his lineage seems to have it out for him.  The trail has led him far from his home in beautiful Opal City, on a global trek to find those who would do him harm.  The trail has led to the bedside of a mysterious old man in the Australian outback, a man who greets the Shade in a manner most surprising:  “Hello, Grandfather.”

This issue opens with a striking series of pages set in Barcelona, as a lone woman in a crimson cape fights several foes all at once.  The villains, known as Los Tomodores, have run afoul of Barcelona’s protector, La Sangre, a woman who happens to be a vampire as well as a hero.  She loses sight of one of her foes for a moment, only to be saved by The Shade, who teases her about her age.  “Hello, father,” responds the vamp-eroine though a mouthful of fangs.  Robinson promised that this story would explain more about the Shade and his past, but he forgot to mention how it would all be maddening to read.  We find out what happened in Australia (his great-grandson gave him information that indicates that the person who is trying kil kill Shade is someone within the family) and that Shade has come to find La Sangre because of her peculiar hobby:  Collecting vials of blood.  (Her latest treasures include JFK and Alfred Hitchcock, which seems to be a pretty impressive feat, given that they’ve both been dead for decades.)  The idea of a vampire as superhero isn’t an entirely new one, but La Sangre’s visual (a very Gothy crimson-and-black ensemble including torn fishnets) is strong.

YO HO HO, AND A BOTTLE OF RICHARD’S BLOOOOOOD!

The setup for the rest of the issue shows us La Sangre’s arch-enemy, who may or may not be as immortal as she and Shade, and shows us not only her origin, but the moment wherein Dicky Swift finally ceased being human.  The Shade is not her literal father, but saved her (and ONLY her) from a vampire attack on a sailing ship in the 1850’s, a battle which cost him the last bits of his humanity but gained him a child.  Robinson and Pulido do some lovely work in this sequence, especially as The Shade repeatedly maintains that he cared “not a jot” for anyone on the ship, while destroying all the vampires with his shadowy tendrils.  It’s a nice bit of storytelling, getting to the heart of the dichotomy in The Shade, a duality that reminds me a bit of Neil Gaiman’s writing on ‘Sandman.’  The issue ends with Shade insisting upon accompanying his adoptive vampire daughter as she sets off to confront her arch-foe, a full-page shot that is impressive in both architecture and heroic intent.  I’m certain it’ll end poorly, but it’s a lovely moment anyway…

THE VERDICT: LITERATE AND LIKABLE…

This series has been quite delightful to read each month, but I’ve found myself more interested in the side trips and related stories than in the central tenet of someone wanting to kill the immortal shadow-man.  This issue’s pirate tale feels far too brief, and there seems to be a LOT of stuff packed into this issue, from the confrontation with Caldecott to the backstory on La Sangre to the supervillain fight at the beginning.  All in all, my greatest worry is that we’re halfway through the story and that the meandering parts, those moments where he remembers some interesting anecdote about his lucky autographed snorkel and that sarcastic guy Marty, have been the most entertaining bits.  Hopefully, the mystery at the heart of the book doesn’t get short-shrift with the clever bits and pieces of history and mythology that make it such fun.  The Shade #5 isn’t quite as engaging as last issue, but still makes for an entertaining read, and looks phenomenal throughout, earning 3.5 out of 5 stars overall.