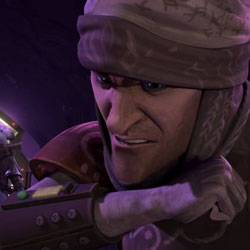 Simon Pegg comes to the Star Wars universe this weekend as Dengar, a bounty hunter who takes on a dangerous mission. This week, in “Bounty,” an aimless Asajj Ventress joins a team of bounty hunters under the leadership of young Boba Fett. On an alien world, they undertake a dangerous but profitable mission that tests the limits of their skills, and the strength of Asajj’s character.

Dengar – one of the bounty hunters seen in the company of Boba Fett in The Empire Strikes Back – is coming to The Clone Wars, and actor Simon Pegg (Star Trek and Shaun of the Dead) is playing him in this week’s episode.