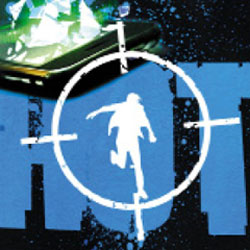 The creative superteam of Andy Diggle and Jock are returning to the 2000 AD stable next month with their first creator-owned project together.

Snapshot debuts in the Judge Dredd Megazine #322, on sale Wednesday 28 March in the UK and 11 April in North America.

This tale of cold-blooded killers and sinister conspiracies is the first time the British team behind hit series The Losers have worked together on their own property and marks a return to the Megazine after their fan favourite Judge Dredd spin-off series, Lenny Zero.

“Jock and I have been chipping away at Snapshot for a few years now in our spare time, assuming we’d approach a publisher once we had enough material to show,” said Diggle. “But when I bumped into Matt Smith at the New York Comic Con, he suggested the Megazine’s creator-owned slot might be the perfect place for it. After all, the Megazine was where Jock and I first worked together on Lenny Zero, back before The Losers or Green Arrow: Year One. So it feels like coming home. Jake is an easygoing San Francisco slacker, living in a benign fantasy world of comic-books and video-games.

One morning, as Jake is riding his pushbike through Golden Gate Park to work, he spots a state-of-the-art smartphone lying in the grass. Sticking it in his backpack, Jake rides to the comic-book store where he works and flips through the photos stored on it. Photos of a murder victim.

Then the phone begins to ring…

Every month the Megazine includes 10 pages of original creator-owned comics, with previous series including American Reaper by Pat Mills and Clint Langley, and Simon Spurrier and PJ Holden’s Numbercruncher.

“I’m grateful to Rebellion for giving us a venue for creator-owned work,” added Diggle. “Writing characters that you’ve always loved is great, but nothing beats the feeling of creating your own. It’s incredibly exciting to see it finally taking shape after all these years. It’s a real passion project for me, exactly the kind of story I love to tell – a grounded, hard- hitting thriller with lots of action and unexpected twists. And after a decade of freelance writing, this is literally the first 100% creator-owned book I’ve ever done, so it’s a real pleasure to be sharing it with my good friend Jock. He always makes me look good!”

“It’s very exciting to have Snapshot debuting in the Megazine,” said Matt Smith, editor of 2000 AD and the Judge Dredd Megazine. “Andy and Jock have crafted a tight, compelling thriller, and I think it’s going to keep the readers on the edge of their seats!”