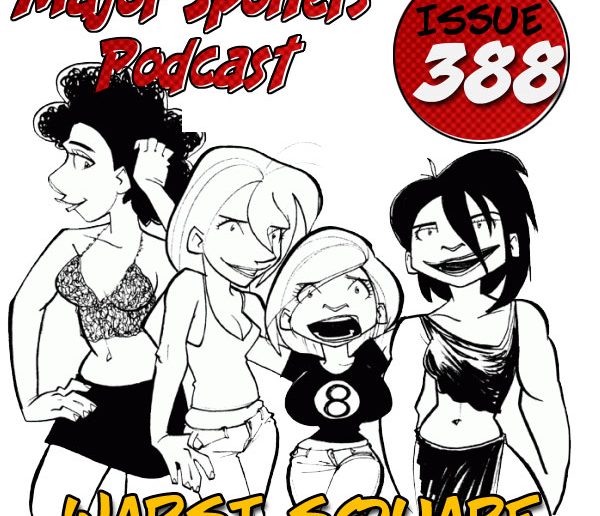 In this issue: Girls who are demons, boys who have issues, magic that has the ability to teleport, mutants that need teaching, millions of dollars being raised, and much, much more in this issue of the Major Spoilers Podcast.

REVIEWS
Stephen
Charismagic #5
Vince Hernandez – Story / Khary Randolph – Art / Emilio Lopez – Colors
With the stress of the task that lies ahead bearing down on him, Hank begins to doubt himself. Aware of his concern, Sudana decides the time is right to show Hank the extent of his magical abilities—a power even he could never have imagined possessing—yet, her lesson brings them much closer in unexpected ways as well. Meanwhile, The Guardians and Sparkles plan for their assault on the now-captured temple of Kon, but what they don’t realize is Samsun is on a mission to intercept—and kill–his enemies before they reach him! The penultimate build-up to next issue’s finale starts here!

Rodrigo
DEAD MAN’S RUN #2 Greg Pak – Writer / Tony Parker – Art
From acclaimed “Hulk” writer Greg Pak, legendary “Walking Dead” producer Gale Anne Hurd, and Tony Parker, artist of the Eisner-nominated “Do Androids Dream of Electric Sheep”, comes the biggest blockbuster series of the new year – DEAD MAN’S RUN!
What does a dead man do when he discovers that Hell is the world’s most horrific maximum-security prison on the planet? If you’re cartographer Sam Tinker, you plan your escape — by pulling together a team of Hell’s most terrifying inmates. Discover how far a good man will go to save his innocent sister, and get ready for an unbelievable supernatural action-packed thriller, as Aspen Comics proudly presents its newest hit series, DEAD MAN’S RUN!

Matthew
Avengers Academy #26 Writer: Christos Gage Penciller: Tom Grummett  • Who killed an Avenger? Find out here!  • Which cast members are tryng to shut down the Academy?  • The big conclusion to “Second Semester”‌!

Major Spoilers Poll of the Week
A number of home security options have appeared over the years, but with the coming apocalypse (no, not THAT Apocalypse), home protection is going to be at a premium.  While bazookas, slings and arrows, and any number of MOABs will work, alternate options have appeared that might work, and be fun at the same time.

Discussion:
Wapsi Square (wapsisquare.com)
Monica has stopped questioning her own sanity and started questioning the world around her. Oh, she might still be crazy, but Tepoz, the Aztec God of Alcohol is real, and really did summon the fractured remains of a chimera in the form of three drunk college girls. Who know the power to lay waste to civilization was so sexy?

Monica’s friends will help her keep her grounded, but can they be trusted with the secret to the end… and the beginning… of the world?

Wapsi Square’s dark humor and macabre fantasy create a world almost exactly like the one you want to believe you live in.