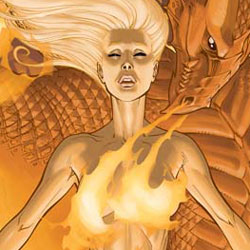 Dynamite Entertainment sent Major Spoilers a sneak peek of George R.R. Martin’s A Game of Thrones #6, Lord of the Jungle #2, Voltron #3, The Bionic Man #7, Green Hornet #22, Kirby: Genesis – Dragonsbane #2, and many more, that you can check out, after the jump.

GEORGE R.R. MARTIN’S A GAME OF THRONES #6
32 pages FC • $3.99 • Mature
Written by GEORGE R.R MARTIN
Adapted by DANIEL ABRAHAM
Art by TOMMY PATTERSON
Cover by MIKE S. MILLER
“Virgin Art” Retailer incentive cover by MIKE S. MILLER
“Black & White” Retailer incentive cover by MIKE S. MILLER
Daniel Abraham’s adaptation of George R. R. Martin’s acclaimed epic fantasy A Game of Thrones continues to cast its gripping spell. In the savage north, Jon Snow finds new friends—and enemies—among the brothers of the Night’s Watch, sworn to defend Westeros against the horrors that lie beyond the Wall. In the more civilized savagery of King’s Landing, Eddard Stark learns from Catelyn of the Lannisters’ involvement in the attack on Bran . . . and the murder of Jon Arryn, the previous Hand of the King. While across the Narrow Sea, Daenerys—newly wed to Khal Drogo—learns what it means to be a khaleesi of the Dothraki.

VOLTRON #3
32 pages FC • $3.99 • Teen +
Written by BRANDON THOMAS
Art by ARIEL PADILLA
Cover by ALEX ROSS (75%), SEAN CHEN (25%)
“Virgin Art” Retailer incentive cover by ALEX ROSS
“Black & White” Retailer incentive cover by SEAN CHEN
The Man From Arus has come to Earth with an urgent message—Drule is coming and our planet lacks any credible defense. To turn the tide, an embattled scientist must accept the impossible and place the fate of humanity in the hands of something that doesn’t exist. And little does he know that his fateful actions have brought the Voltron Force to their current situation almost a hundred years later…staring down a battalion of shock troops and Robeasts that have come to make sure Voltron doesn’t get rescued and the day doesn’t get saved. Generation Voltron continues…

THE BIONIC MAN #7
32 pages FC • $3.99 • Teen +
Written by KEVIN SMITH, PHIL HESTER
Art by JONATHAN LAU
Covers by ALEX ROSS (main), JONATHAN LAU (1-in-10)
“Virgin Art” Retailer incentive cover by ALEX ROSS
Steve is reunited with Jaime for the first time since his transformation, but can even his true love find a place in her heart for a lover who is now more machine than man? The truth about the homicidal Hull’s origin and its ties to Oscar Goldman come out, and Steve learns that being an O.S.I. agent is a lifetime commitment… sometimes an involuntary one.

GREEN HORNET #22
32 pages FC • $3.99 • Teen +
Written by ANDE PARKS
Art by IGOR VITORINO
Covers by PHIL HESTER (33%), JONATHAN LAU (33%), BRIAN DENHAM (33%)
In the first issue of an all-new arc that will change Green Hornet forever! New villains arrive on the Century City scene, and an old hero dies. Britt Reid tries
to manage a newspaper, fight the gangs of Century City, and figure out his relationship with the new Kato. Meanwhile, a new politician attempts to rise to the top of Century City’s power structure on a simple platform: stopping the Green Hornet’s “Reign of Terror”. Fear, loathing, lust and all-out kung fu action in Outcast, Part One of Six!

KIRBY: GENESIS – DRAGONSBANE #2
32 pages FC • $3.99 • Teen +
Plot by ALEX ROSS, ROBERT RODI
Script by ROBERT RODI
Art by FRITZ CASAS
Cover by ALEX ROSS
“Virgin Art” Retailer incentive cover by ALEX ROSS
Spinning out of KIRBY: GENESIS, Sigurd Dragonsbane and his band of Norse champions explore the astonishing Mythlands, where the heroes and legends of every culture on earth now reside. But when they venture into the Olympian region, they run afoul of both Circe and the Cyclops…and the power and majesty of Ulysses might not be enough to save them! Plus: Balduur reveals an incredible secret power…at the possible expense of his own life!

THE LAST PHANTOM #12
32 pages FC • $3.99 • Teen +
Written by SCOTT BEATTY
Art by EDUARDO FERIGATO
Covers by ALEX ROSS (main), STEPHEN SADOWSKI (1-in-10),
JONATHAN LAU (1-in-15)
What is the Eden Pool? As The Phantom battles to end the war ripping Bengali asunder, Kit Walker finally learns the dark secrets behind the Walkabout Foundation’s role in fomenting discord in the troubled African nation. The Ghost Who Walks began his crusade for justice in the Skull Cave. But his end might come in another subterranean grotto when he meets a woman named… Diana Palmer!

ROBOCOP: ROAD TRIP #3
32 pages FC • $3.99 • MATURE
Written by ROB WILLIAMS
Art by UNAI DE ZARTE
Cover by FABIANO NEVES
How do you stop a metal man sinking? With Robocop and the Old Detroit resistance’s plane crashed in Lake Eerie, it’s a question of what will kill them first? The water or the vicious and bloodthirsty Hunter robot prototypes of OCP. Can Murphy survive, retain his sanity and bring help to his city? And what will the final fate be of OCP’s Old Man?

VAMPIRELLA STATUE INSPIRED BY ADAM HUGHES – DIAMOND EYES EDITION
8” Tall • Introductory price:$189.00 • Regular MSRP: $289.99
Advance-Solicit. in stores November­ 2011 • (C:0-1-2)
Sculpted by TOM & JOY SNYDER
This incredible Adam Hughes image of Vampirella comes to three dimensional life courtesy of Dynamite Entertainment! Sculpted by the incredibly talented Joy and Tom Snyder, this statue will be a welcome addition to your high end collection. This is one of Adam’s incredible cover images for Vampirella, from 1993, and now Dynamite is proud to present this brand new statue, through the painstaking craftsmanship of Joy and Tom Studio – comes this fully realized work of art perfect to display in your shrine for Vampirella.

“Hi, There! Welcome to the coolest girl-meets-ghoul collection on the market. In this fourth volume you’ll find stories that will bewitch and bedevil you. Steve Skeates and Jose Brea bring forth The Sentence! Don Glut and Esteban Maroto’s slithering Cobra Queen. The Haunted Child by Nicola Cuti and Auraleon and Doug Moench and Estaban Maroto’s creepy Moonspawn. And finally you can read my adventures as told by John R. Cochran, Steve Englehart, Bill Dubay, Len Wein, Jose Toutain, Flaxman Loew and illustrated by Jose Gonzalez! Turn the page and come with me……”

“…the writers and artists who chronicled her stories are the best of the best.“ – The New York Times

Six hundred years ago long, before history’s great explorers stole the credit for their feats, mighty Chinese treasure fleets set sail to reach every continent. These voyages of discovery left behind an evil legacy and a plot by a powerful Chinese sorcerer to dominate the world. Now in modern day Los Angeles, an ancient Chinese prophecy must be fulfilled and seven men with nothing in common but their destinies must face the Son of Hell to save the world. This omnibus edition contains the entire ten issues of the comic book series.

“Seven Brothers is a natural combination of Woo and Ennis. In both of their best works, the major themes addressed are brotherhood and the application of stylish but excessive force. Ennis excels in bringing a defined identity and a sense of realism to a fantastic tale.” – Fractal Matter

“There’s a lot of potential in this book, especially with the brothers hailing from all over the world, that could make this the hard-core, uncompromising flipside to NBC’s Heroes.” – Variety, Bags & Boards

“This series has it all and is a must read for any comic fan.” – Comic Fever

VAMPIRELLA & THE SCARLET LEGION TRADE PAPERBACK
128 pages FC • $19.99 • Teen + • (C:0-1-2)
Written by JOE HARRIS
Art by JOSÉ MALAGA
Cover by J. SCOTT CAMPBELL
The Crimson Chronicles, that foul bible of blood, foretells the coming of Chaos, the Destroyer and his servants on earth. Since her earliest days, Vampirella has stood between that vicious cult and their Mad God’s plans. But when an ancient prophecy of doom is uncovered and a new push to resurrect the foulest demons from the pit is revealed, it’s clear Vampirella won’t be able to take them on alone. Enter THE SCARLET LEGION, a strike force assembled to keep the dark things at bay and protect this world from the evils which lie beyond. Set against a plot millennia in the making, caught between old friends like Mordecai Pendragon and Adam Van Helsing, old enemies like Ethan Shroud and unflinching warrior maidens who serve the Vatican itself, Vampirella hill have to figure out who to trust, who to believe and what to do next as the cinches tighten, Chaos’ hour ticks near and the Scarlet Legion begins its hunt. The only question is, will they see Vampirella as friend… or foe?

This volume collects issues one through five of the acclaimed mini-series, Vampirella and the Scarlet Legion, and features all of the series covers by J. Scott Campbell, Sean Chen, Billy Tucci and Johnny Desjardins.

GRANT MORRISON’S 18 DAYS HARDCOVER
144 pages FC • $24.99 • Teen +
Written by GRANT MORRISON
Art & Cover by MUKESH SINGH
From superstar creator Grant Morrison (All Star Superman, Batman & Robin, The Invisibles), comes “18 Days,” the story of three generations of super-warriors, meeting for the final battle of their age. 18 Days is a re-imagining of the great eastern myth, the Mahabharata, and follows the course of the climactic war that concludes the age of the gods and begins the age of man. It is the prototype for every war ever fought. The scale is epic, wherein the biggest armies ever conceived face one another across the ultimate battlefield to decide the fate of the future. This hardcover illustrated script book allows readers a first glimpse into the mythic animated series being developed by Morrison. The book reveals the inner workings of the acclaimed writer’s process and features the original animation scripts, story bible, character descriptions and commentaries. Morrison’s groundbreaking story is matched perfectly with original illustrations created by acclaimed artist, Mukesh Singh (Devi, Gamekeeper).