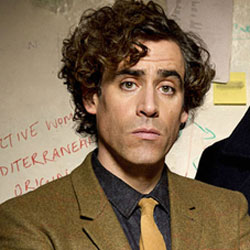 While many people are excited to learn new tidbits of information regarding the BBC’s Doctor Who and Sherlock Holmes, I’m excited to hear that Dirk Gently is returning for another run.

The last time we saw Douglas Adam’s holistic detective was back in 2010, and now the BBC has requested a three-part run that begins airing March 05, at 9:00 PM on BBC Four.  The series stars Stephen Mangan as Dirk Gently, along with Darren Boyd, Helen Baxendal, Jason Watkins, and Lisa Jackson.

In Episode 1 of this new three-part series, Dirk discovers the connection between two unrelated cases; a client who believes the Pentagon are trying to kill him and another who’s horoscopes appear to be coming true. In Episode 2 Dirk is called back to his old university to protect a valuable robot but within 24 hours it has been stolen and a dead body discovered, with Dirk & Macduff the prime suspect. In Episode 3 they are alarmed to discover that Dirk’s old clients are- being randomly murdered with Dirk as the only link. Rather than talk to the police, Dirk elects to leave the country but is waylaid by a series of seemingly unconnected events.

There’s no Dirk Gently in the iTunes store, and BBC America is running reruns of Top Gear, so here’s hoping we’ll get to see the original pilot and three-part series real soon.