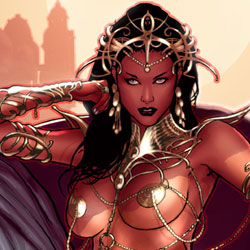 According to an article via the Wall Street Journal, ERB Inc. claims Dynamite Entertainment’s Warlord of Mars and Lord of the Jungle “constitute trademark infringement and unfair competition.”

“Plaintiff is the owner of all existing copyright and trademark rights in and relating to the literary works of the famous author Edgar Rice Burroughs, including the celebrated TARZAN stories and TARZAN character, and the classic science-fiction story and characters of JOHN CARTER OF MARS.  For decades, Plaintiff has used or licensed use as trademarks, inter alia, the character names from Mr. Burrough’s stories, including without limitation, the marks TARZAN, TARZAN LORD OF THE JUNGLE, JOHN CARTER, JOHN CARTER OF MARS, and JOHN CATER WARLORD OF MARS on and in connection with a wide variety of goods, including comic books.  Decades after Plaintiff began using and licensing the use of these marks, and decades after Plaintiff built up and obtained an enormous reputation and goodwill in these marks, Defendants without Plaintiff’s authorization have released a series of comic books bearing identical or confusingly similar marks – namely, LORD OF THE JUNGLE, WARLORD OF MARS< WARLORD OF MARS: DEJAH THORIS, and WARLORD OF MARS: FALL OF BARSOOM. Such actions by Defendants constitute trademark infringement and unfair competition under the U.S. Trademark Act, also known as the Lanham Act, 15, USC. 1051 et seq., and related New York Law. “

The document goes on and on…

ERB Inc. was set up in 1923, and is currently owned by family members of Mr. Burroughs. What amazes me the most about the lawsuit is ERB Inc. waiting until now, just weeks before the John Carter movie opens nationwide, even though Dynamite has been publishing the Warlord of Mars series since December 2010.  Why is the company waiting this long to file the suit?  Were they waiting to see if the property would be successful in order to sue for more money?  Are there other deals ERB Inc. has that have not been made public that could be hurt by the Dynamite books?  And yes, Disney is mentioned many times in the document by pointing out the relationship Disney and ERB Inc. have had in the success of those properties.

It is also interesting to read that ERB Inc. is concerned over the risque and nude variant covers featuring Dejah Thoris as injuring the reputation and value of the characters and property, even though there are many passages remarking on characters being nude or nearly so in the original source text.  Again – John Carter opens nationwide March 09, 2012.

Dynamite Entertainment has been under fire over the last couple of years whenever classic characters and ownership have popped up.  A few years ago, the Intardwebz allowed to play out the squabbling between Dynamite and Moonstone Books over the acquisition of The Phantom, as Moonstone was also releasing Phantom books at the same time.  Interestingly, Dynamite has recently announced The Spider, another property Moonstone has worked with on a regular basis over the years.

ERB Inc. is demanding the immediate recall of all Warlord of Mars and Lord of the Jungle titles, asking for damages sustained by the trademark infringement, and pay ERB all profits, gains, and savings. If ERB Inc. does win the suit, the most difficult part of the judgement will be in the amount awarded, as “damages” are very difficult to prove and justify.  For example, IF John Carter tanks at the box office, can ERB Inc. point to the Dynamite books as a reason for this? It is interesting to note that the suit was filed on the same day that reports that Disney is ready to write off John Carter as a loss.

Lawsuits are never fun, but when money is involved, it seems the lawyers are more than ready to jump out of the woodwork to represent companies that feel they have been wronged.   I’m not a lawyer, and certainly don’t pretend to know all the ins and outs of the law, but there is something odd in this lawsuit only coming to the surface now (MARCH 09, 2012 – JOHN CARTER!).  If ERB was really concerned about this, why didn’t they try to stop publication over a year ago?

As of now, Dynamite Entertainment and Dynamic Forces have not made a public statement on this lawsuit.