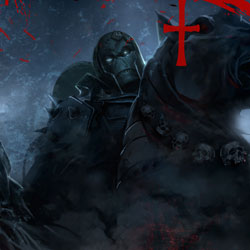 SOLICITATIONS: Four Horsemen of the Apocalypse arrives in April

Kevin Eastman, owner and publisher of Heavy Metal Magazine, today announced the first major publishing event for the year-long 35th anniversary celebration with the launch of The Four Horsemen of the Apocalypse. Eastman states “This incredible three-book series featuring the stories of Michael Mendheim and art of Simon Bisley will also include special fan incentives and social media-focused promotions and preview exclusives that aim to thrill our die-hard fans, friends, fans and Heavy Metal followers.”

The End is Here- Welcome to the Apocalypse! Raised by the Order of Solomon, Adam Cahill is one of a rare handful of highly trained warriors bound by bloodline to guard the Seven Holy Seals that contain the End of Days. But ageless forces have conspired towards a prophetic event foretold by numerous cultures and multiple religions, and when that cryptic date arrives, they strike against the order without mercy! The Four Horsemen of the Apocalypse is a dark, gritty, action – horror story inspired by the biblical tale of Armageddon. In addition to the works of Simon Bisley, the series will feature additional art by the late Stan Winston, Tim Bradstreet, Chad Fidler, and Dave DeVries, and script written by co-writers Mike Kennedy and Sean Jaffe. 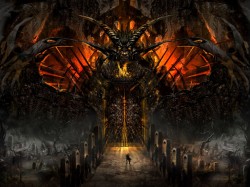 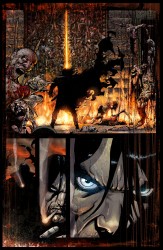 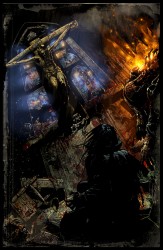 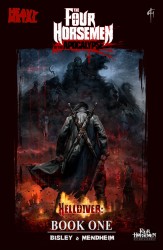 “I feel we have created a top-notch horror story that combines the feel of the Matrix with Hellraiser.” said Michael Mendheim, creator and writer. “This project has demanded a lot of passion and commitment and it really shows.” Mendheim continues “The partnership with Heavy Metal is one that Simon and I are thrilled to have. They are the perfect publisher for this event.”

Comics legend Simon Bisley says “A lot of blood, sweat and tears went into making this book the book it is – it’s very gratifying that it has found a good home with Kevin Eastman and Heavy Metal Magazine – I take my hat off to Michael for entrusting me with this huge project.”

Kevin Eastman adds “I’ve been a huge fan of Michael’s project from the moment I first saw it. The added bonus of the Four Horsemen series is that we also get to work with my long-time friend Simon Bisley again. And to add to the 35th anniversary celebration efforts for this Heavy Metal project we will be offering special incentives and preview exclusives for our friends and fans.”

Eastman continues with “One of the great promotions we have lined up is the Pestilence Art Contest on our Facebook page. Someone will win an original signed painting from Simon Bisley and ten finalists will be celebrated in the September issue of Heavy Metal!”

For more information about the contests, events and surprises, be sure to check out our Facebook page. http://www.facebook.com/Thefourhorsemenoftheapocalypse
You can also visit our home page at: http://fourhorsemen.heavymetal.com/

About The Writer: Michael Mendheim

Michael Mendheim has worked as an Executive Producer and Creative Director in the videogame industry for over twenty years. Some of his projects include the #1 hit, Mutant League Football (which spawned a syndicated animated series and toy line) and the hugely successful, Army Men series as well as BattleTanx, DefJam: Icon and the critically acclaimed Robocalypse. Michael is currently producing the Free-to-play online shooter CrimeCraft.

About the Artist: Simon Bisley

Simon Bisley, world-famous fantasy painter/illustrator, started his career when he signed up with 2000 AD, a British comic book company, where he was assigned “ABC Warriors,” “Sláine” and “Judge Dredd.” Following his massive success in the U.K., Mr. Bisley American invasion started with DC Comics, where he produced award-winning work on “Doom Patrol,” “Lobo,” and fan favorite “Batman vs. Judge Dredd.” Quickly climbing to the top of the “Best Selling Cover Artist” list, Simon created some of the industry’s most memorable images and has collaborated on several major graphic novel projects, such as “Melting Pot,” “Death Dealer,” “Aliens,” “Bad Boy,” “Bodycount,” “F.A.K.K. 2,” and “Jaguar God.” Mr. Bisley has also provided character designs and concept art to a wide variety of notable Hollywood productions, including Stan Winston’s “Galaxy Quest” and the “Time Machine” remake.

Founded in 1977, Heavy Metal has become an iconic American science fiction and fantasy comics magazine known world-wide for its incredible blend of dark fantasy/science fiction and erotica. Kevin Eastman, co-creator of the Teenage Mutant Ninja Turtles, purchased the world re-known “Heavy Metal Magazine” in 1990 and serves as Publisher and Editor-in-Chief.