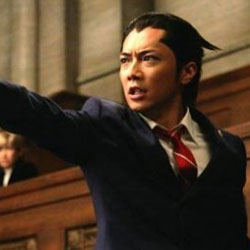 AM2: Ace Attorney to debut at AM2 convention

The ever popular ACE ATTORNEY (Gyakuten Saiban-2012/Mystery, Drama/Approx. 130 min) manga and video game comes alive in this live action feature film to be screened EXCLUSIVELY at this summer’s most anticipated Anime, Manga and Music event AM2. Two screenings will be available-one EXCLUSIVELY for Passport holders ONLY and the second for Passport holders preferred (with general attendees as seating permits). More info and attendee registration can be found at www.am2con.org

First released in 2001 for the Nintendo “GAME BOY”, ACE ATTORNEY was ported
for the DS, PC, Wii. With four games in the series, Ace Attorney has sold
over 4.2 million copies worldwide. The series has been further popularized
and continues to build a new fan base via the advent of spinoff series Ace
Prosecutor (gyakuten-kenji in Japanese) to the game appearing on GREE,
Japan’s leading social networking service and in comic book form. In 2008,
the Tokyo Philharmonic Symphony Orchestra performed a concert based on the
game, and the following year, the Takarazuka Revue Company started their
live musical performance of the series.

Set in a futuristic, fictional Japan courtroom where “bench trials” have
been implemented to fight rising crime, the appealing amusement of Ace
Attorney has to be its leading character, hot-blooded, sometimes
4th-down-and-long-Hail-Mary rookie defense lawyer, Phoenix Wright. The
speedy storyline, filled with twists and turns of sheer enjoyment, unfolds
as Phoenix finds the truth and wins his case. Rising from the ashes when the
chips are down, he challenges the court with “evidence” collected through
his own investigations and exposes the actual criminals and their pack of
lies.

The story structure of the film is based on the characters and amusing story
twists from the first work in the series. Penning the screenplay are none
other than the cop and courtroom drama master Takeshi Iida (writer for
SHINZANMONO and PARTNERS) as well as Sachiko Oguchi (KAIJI 2) who is popular
for her fast paced scripts. The director is hit-maker Takashi Miike,
world-renowned for his talent and the pride of the Japan filmmaking world
whose latest works always attract attention. In this film, Miike depicts a
heated courtroom battle by evoking his novel visual sense with VFX and CG
and his unique “Miike magic” directing of actors from films like YATTERMAN,
the CROWS – Episod 0, CROWS and Thirteens Assassins. While most films set in
courtrooms tend to offer low-key, pedestrian visuals, the courtroom scenes
in this film are amazingly attractive for audiences.

SYNOPSIS
In 20XX, to prevent the rise of vicious crimes the government introduces
“bench trials” a new justice system where the defense and prosecutor go
head-to-head in open court. Within just three days, a guilty or not guilty
verdict is decided.

After the trial, Phoenix receives word that Miles has been arrested for
murder! Phoenix steps forward to defend Miles. Opposing council is none
other than Miles’s master, legendary prosecutor von Karma (Ryo Ishibashi)
who has been undefeated in court for 40 years. As the trial goes on, the 15
year old DL-6 case, where Miles’s father Gregory Edgeworth was shot and
killed in the evidence room, is examined closely.

What will become of Phoenix, Miles and Maya? What dangerous truth lies
behind this mysterious case?

Staff and the Cast

Attendees can avoid the anticipated huge lines at autographs, premiere
screenings, workshops, main events, concerts and panels by purchasing a
Passport fast pass for the event. The Passport fast pass will also provide
holders with premier seating options at Main Events and at Concert events as
well as major discounts with theme parks, retailers and local restaurants.
Bypass the lines and get your Passport today and experience the difference!

About AM2
Located in Anaheim, California – AM2, established in 2010, is a multi-day (3
days) 24 hour event with no general attendance/badge purchase requirement
and is aspiring to be a key meeting place for fans that share a common
interest in Asian music, Animation/Anime, and Comics/Manga. Nominal fees
are charged for certain activities that attendees choose to participate in.
AM2 will be held on June 15-17, 2012 at the Anaheim Convention Center in
sunny Anaheim, California. More information can be found at www.am2con.org