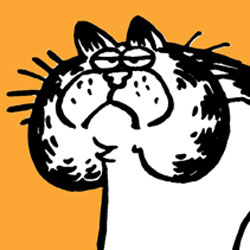 KaBOOM!, BOOM! Studios’ all-ages imprint, is proud to announce a partnership with PAWS, Inc. to produce a new original ongoing GARFIELD comic book this May. THE GARFIELD SHOW and GARFIELD AND FRIENDS writer Mark Evanier teams up with Garfield strip cartoonist Gary Barker to bring you all the laughs (and lasagna) you can handle!

“We are incredibly honored to work with this character and this creative team,” BOOM! Studios Founder and Chief Executive Officer Ross Richie said. “Mark Evanier wrote or co-wrote nearly every episode of seven seasons of the show GARFIELD AND FRIENDS, one of the longest-running Saturday Morning cartoon shows in history, and works on THE GARFIELD SHOW right now. He, along with strip artist Gary Barker, were hand-picked by Jim Davis himself, so we know we’ve got just the right creative team.”

“We can’t wait to tell new Garfield stories,” BOOM! Studios Editor-in-Chief Matt Gagnon said. “We have two awesome creators who have had their hand in the Garfield world for a very long time. We couldn’t ask for better creators to work with and bring the world of lasagna, hated Mondays and diets to the Direct Market.”

This May, everyone’s favorite lasagna-scarfing cat opens the fridge to an all-new ongoing comic book series! Join Garfield as he begins his monthly exploits with Jon, Odie, and the rest of the gang in the latest all-ages must-read from KaBOOM! With brand new stories featuring everyone’s favorite feline, this debut #1 issue is sure to please Garfield fans new and old alike! 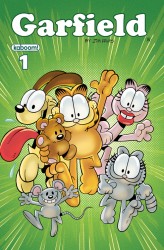 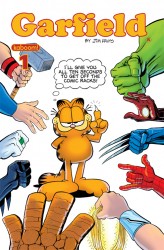 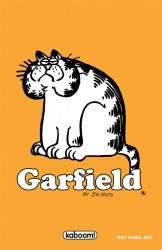 About Garfield
GARFIELD was born on the comics pages on June 19, 1978. The mastermind of cartoonist Jim Davis,GARFIELD is a humorous strip centered on the lives of a fat, lazy, cynical orange cat who loves lasagna, coffee, and his remote control; Jon Arbuckle, his owner; and Odie, a sweet but dumb dog. GARFIELD was introduced to the world in just 41 newspapers and is now the most widely syndicated comic strip ever, appearing in 2400 newspapers. The success of the comic strip spawned a popular animated TV show, Garfield and Friends, which appeared on CBS-TV from 1988 to 1995, and is currently in worldwide syndication. In 2009, The Garfield Show debuted on Cartoon Network USA and now airs in 135 countries. PEOPLE magazine called the show, “One of the Year’s Best New Kids’ Shows” in 2009.

In 2004, Twentieth Century Fox invited Garfield to star in his first-ever full-length feature film, Garfield: The Movie. A sequel, Garfield: A Tail of Two Kitties was released in June 2006. The movies earned over $340 million at the box office. Garfield has also starred in three CGI animated movies, all penned by Jim Davis. Fox released Garfield Gets Real (2007), Garfield’s Fun Fest (2008), and Garfield’s Pet Force (2009) on DVD and in limited theatrical release.

Garfield also entertains his fans on a popular web site, garfield.com, and engages kids in interesting and pedagogically sound activities to promote literacy at professorgarfield.org. English, Science and Life Skills are among the topics Garfield and his pals address at learninglab.org, a public service of the Virginia Department of Education.

Garfield has long been considered a “classic” or “evergreen” property because he has not only endured, but continues to be fresh and funny after over 30 years in the limelight.

About Garfield
Cartoonist Jim Davis’ company, Paws, Inc., located near Albany, Indiana, was founded in 1981 to handle the creative end of the Garfield licensing business. Today, Paws is the sole owner of all copyrights and trademarks for the Garfield property, and controls not only the creative angle of the fat cat’s flourishing empire, but also the licensing, marketing, and brand management of Garfield and the Garfield characters.