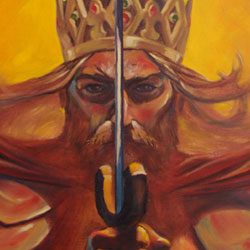 With the world as we know it gone, mankind is on the verge of extinction yet still struggling to find purpose and hope.

From the ancient past a glimmer of light shines and a legend returns to claim his throne. Facing challenges never imagined in his time, King Arthur shall rise again and bring the mighty Excalibur to the throats of all who wish to do harm to his people.

Arthur: The Legend Continues takes the legendary king from his “death” on an ancient battlefield to a village on the brink of destruction in a post-apocalyptic future. As the once and future king tries to find his place in this strange new world, he soon discovers that danger lurks around every corner and this new world is more deadly and mysterious than he could possibly imagine Arthur: The Legend Continues is the flagship series from Cosmic Times and originally premiered at Orlando’s MegaCon in 2009. Now to celebrate the collection of the first volume Cosmic Times has created an extremely limited MegaCon exclusive trade paperback featuring a stunning cover by Dan Mann. Volume I will collect the original 106 pages of the series along with seven never before seen pages of deleted scenes. This exclusive edition will have a limited print run of 25 copies and can only be purchased at MegaCon starting February 17th at the Cosmic Times booth – Indy Press 7. A regular edition will be released soon after.

Established in 2009, Cosmic Times has become a small-press favorite with such diverse titles as Decisions, From Blood and Souled. Publisher Martin T. Pierro (who named Cosmic Times after a fanzine he published back in the mid 80s while still in middle school) is continuing to focus on his goal of making Cosmic Times into a true independent publishing house that focuses on quality storytelling.