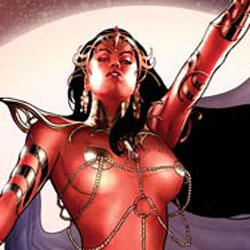 Dynamite Entertainment sent Major Spoilers a sneak peek of titles arriving in stores this week.  Take the jump for an early look at Army of Darkness #1, Flash Gordon: Zeitgeist #3, Warehouse 13 #4, and more.

ARMY OF DARKNESS #1
32 pages FC  • $3.99  •  Teen +
Written by ELLIOTT R. SERRANO
Art by MARAT MYCHAELS
Covers by TIM SEELEY (main), MARAT MYCHAELS (1-in-10)
“Black & White” Retailer Incentive cover by TIM SEELEY
Listen up screwheads! A new chapter in the Army of Darkness saga begins here! As the evil of the Necronomicon spreads across the cosmos, a new ally in the war against the Deadites emerges. Who is the woman named “Ash” and what relation does she have to “The Chosen One” Ashley J. Williams? And who is the alien Deadite creature who follows her across time and space? The answers lie deep within the pyramids of ancient Egypt…in a parallel universe! The adventures of everyone’s favorite chainsaw swinging, boom-stick wielding hero continue here!

VAMPIRELLA #14
32 pages FC •  $3.99  • Teen +
Written by ERIC TRAUTMANN
Art by JOSÉ MALAGA
Covers by PAUL RENAUD (25%), IBRAIM ROBERSON (25%), ALÉ GARZA (25%), FABIANO NEVES (25%)
“Blood Red” Retailer incentive cover by PAUL RENAUD
“Black & White” Retailer incentive cover by FABIANO NEVES
The secret of Vampirella’s mysterious benefactors deepens, as she struggles with a legendary creature of mythology in a dead city. Vampirella’s quest to locate a long lost relic in the ghost city of Ani, a relic that must be destroyed before unleashing a century-old horror on an unsuspecting world. Old scores must be settled, conspiracies unearthed, and rest assured: there will be blood in the dust.

WARLORD OF MARS: DEJAH THORIS #10
32 pages FC •  $3.99  • Mature
Written by ARVID NELSON
Art by CARLOS RAFAEL
Covers by JOE JUSKO (33%), PAUL RENAUD (33%), ALÉ GARZA (33%)
“Mars Red” Retailer incentive cover by PAUL RENAUD
“Risqué Art” Retailer incentive cover by ALÉ GARZA
Xen Brega, the cannibalistic moon pirate, has seized the treasure that Dejah Thoris and her reluctant ally, Phondari, the Pirate Queen of Mars, have been after for so long. You can bet neither woman is going to let Brega get away with it – not without a fight! Brega and Phondari both laugh at the idea the treasure might be cursed, but one of them, at least, will learn a little respect by the time the dust settles. The thrilling conclusion of the Pirate Queen of Mars story arc awaits you Dejah Thoris #10: Jeddessa’s Revenge!

QUEEN SONJA #27
32 pages FC  •  $3.99  •  Teen +
Written by LUKE LIEBERMAN
Art by MILTON ESTEVAM
Covers by LUCIO PARRILLO (50%), IGOR VITORINO (50%)
When you move to strike Empress Sonja you had better not miss, because you only get one shot.  Then it is her turn.  Meanwhile Xander and Melea penetrate Koliostri’s growing cult, and learn its secrets.

WAREHOUSE 13 #4 (of 5)
32 pages FC  • $3.99  •  Teen +
Written by IAN STOKES
Art by BEN MORSE
Covers by BEN MORSE (50%), PHOTO COVER (50%)
After a hundred and fifty years at the bottom of the ocean, a collection of dangerous artifacts has finally surfaced and it’s up to the Warehouse team to retrieve it. But when the trail of the legendary Lost Cache leads to a remote corner of the Pacific Northwest, Pete and Myka are the ones who suddenly find themselves in danger of being snagged, bagged and tagged!  For as they’re about to discover, a deadly new adversary has them in her sights — and the Artifact Games have begun!

ROBERT JORDAN’S WHEEL OF TIME:
THE EYE OF THE WORLD #21
32 pages FC  •  $3.99  •  Teen +
Written by ROBERT JORDAN, CHUCK DIXON
Art and cover by ANDIE TONG
Perrin is warned by the wolves about the approach of unfriendly visitors to the stedding – the Children of the Light, whose arrival comes with a deadly cost… to both sides.  Can Perrin and Egwene avoid capture, or will they be at the mercy of the Children?  Join us for Children of Shadow, the next chapter in the thrilling adaptation of Robert Jordan’s fantasy epic The Wheel of Time: The Eye of the World!