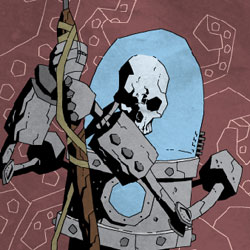 KICKSTARTER: R-13 launches campaign to get paperback edition to fans

One of the most talked-about indie comics of recent years is R-13, aka Robot-13, published by Blacklist Studios The story of a skull-headed robot with an irresistible instinct to battle mythological creatures has captured the imaginations of comic book fans the world over.

In addition to positive reader response, R-13 has also won much critical praise. Rick Marshall, editor of MTV’s movie, pop culture and comic book news site, “The Splash Page” called R-13 the “Best Under-the-Radar Comic Series.” The series has gone on to receive acclaim from the likes of legendary sci-fi author Harlan Ellison, Newsarama, Ain’t It Cool News and many others.

Critical praise is not all the series has won: in the first-ever Digital Innovation Awards at 2011’s Digital Book World Conference, R-13 took top honors in the “Comics” category. At the time of the award, digital downloads for the series were topping 200,000 making it the most-downloaded indie comic series to date. Now Blacklist’s Thomas Hall and Daniel Bradford, the writer and artist behind R-13 are offering old and new fans alike the opportunity to give Robot 13 a permanent place on their bookshelves. Utilizing the popular fundraising website Kickstarter, the duo is seeking to raise funds to publish a special paperback edition collecting the original R-13: Colossus comic book mini-series.

Among the incentives being offered to donors at various levels include original artwork from the comics, custom-made sketches, a glow-in-the-dark t-shirt, mini-figures of R-13 and the company’s other hit character, KING! and several more goodies. The top level prize is the chance for a donor to have their likeness drawn into a future issue… being eaten by a giant monster!

Hall and Bradford are also offering a special incentive for those who donate $13: a copy of the R-13 paperback collection, shipping included.

“While we know cool incentives are one of the reasons people love Kickstarter, we wanted to give our fans an affordable option if they just wanted a copy of the trade,” explained Hall. Those wishing to donate to the project will be able to do so until Tuesday, March 13th at 12:35 PM EDT. Details on how to donate as well as information on additional incentives is available at