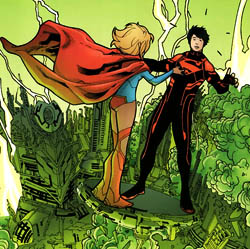 Is it just me, or does Superboy have the old pre-Flashpoint Super-symbol?  Does this mean something? Previously, in Superboy:  This is not your father’s Superboy, which in turn wasn’t his father’s, and so on, and so on, until we’re all in a big shampoo commercial.  Though Kon-El, created by Project Cadmus, isn’t here, we still have a clone created from unknown genetic material by the scientists of N.O.W.H.E.R.E., ostensibly to study and monitor the steadily growing metahuman community for the good of the land.  Sadly, there’s no K.G. to poison their wine in return, and they’ve sent their Superboy out to battle the kids known as the Teen Titans…

SIX ON ONE ODDS…

So, this issue picks up from #5 of Teen Titans (which I didn’t read), but at least it tells us what we need to know:  Superboy went through them like corn through a goose.  Only Solstice remains (and, thankfully, she no longer looks just like Mary Kate Olsen) and her words give Superboy pause.  After agreeing to take down Wonder Girl in return for the information about his cellular donors, S-boy reverses course, and flies away randomly.  There’s a lot of hand-wringing and X-Men-style angst, but I never really understand or believe Superboy’s motivation here, and things get even more complicated when Supergirl arrives out of nowhere.  I’m not entirely clear on the timeframe involved, but it seems like only a short time since Supergirl arrived and fought her cousin in ‘Supergirl #2’, which confuses me more.  Superboy’s costume repairs itself (neat trick, by the way, which I attribute to his textile telekinsis… ba dump BUM!) just in time for another of his powers to pop up:  Telepathy.  This serves a dual purpose in the story, allowing him to communicate with Kara, but also to see the fall of Krypton in all it’s glorious detail.

…BUT WHAT HAPPENED TO THE TACTILE PART?

The rest of the issue goes quickly…  Well, to be honest, the WHOLE issue reads quickly, careening from here to there in a haphazard yet jaunty fashion, as Superboy bounced around by plot and guest-stars (quite literally in the latter case) and shows off a little bit of his new powerset in so doing.  Fellow M.S. contributor Jimmy pointed out that he is saddened that they no longer call Superboy’s powers “tactile telekinesis,” merely telekinesis, and I agree that his abilities and concept suffer just a bit from that loss of unique modifier.  Moreover, in the new DCU, most of what was enjoyable about Kon-El has been “mainstreamed,” to the point where his new uniform is a rather generic red/black jumpsuit and even his name has been retconned.  (Kon-El is apparently a Kryptonian phrase meaning “abomination in the house of El.”)  There is much made of Supergirl’s beliefs about clones, thanks to the Kryptonian clone wars (during which the Jedi Quin-Cee Jonnz fought off the galactic Empire with the help of…  Y’know what?  Too easy…  Joke withdrawn.)  Either way, this issue ends with ANOTHER person showing up to beat on our hero, and ends up feeling very arbitrary and scattered…

Tom DeFalco is a name I haven’t heard recently in comics, and his scripting adds to the unnerving realization that Superboy’s new gimmick feels very much like a random issue of a random X-book, with a guy in a jumpsuit being mistreated because of his genetic background.  The art is quite good throughout the issue, reminding me a bit of Chris Sprouse, but there are some issues with faces and facial expressions, and he has made the puzzling decision to render the lower portion of Supergirl’s costume not like bathing suit bottoms, but instead like a solid shield covering the front of her private regions.  In several shots, it even seems to hang like a loincloth, which must be unnerving for a woman who flies as she does.  Superboy #2 never really gains its footing, ricocheting from one fight to the next without a clear narrative, and stuffing a lot of exposition into a few pages, earning a fragmented 2 out of 5 stars overall.  It’s not a bad comic book, but it’s just not a particularly cohesive one, either…